Author Adrienne Vaughan joins us today to talk a little about some of the research she did for her latest book.

That Summer At The Seahorse Hotel

One family, one secret – that changes everything forever.

What did you research for this book?

I did masses of research for ‘Seahorse’ and loved it. The initial idea emerged after my father gave me a book ‘Guarding Neutral Ireland – the Coast Watching Service and Military Intelligence 1939 – 1945 by Dr Michael Kennedy.’ He loved history, as do I and the deeper I dug the more fascinated I became with this slice of, I would consider, little known historical fact. I just had to feed it into the story somehow.

Then with my main character being a dresser, I needed to delve further. Luckily a close friend’s daughter is a bona fide wardrobe supervisor and was supremely generous with her time answering my endless questions. I was also lucky enough to visit the set of BBC’s Poldark as guest of writer Debbie Horsfield, which gave me even more insight into this wonderful ‘back stage’ world.

Of course I had no choice but to research plays, films and music with two of my other characters being movie stars … I’m sure you all appreciate that was such a hardship! (not)

But probably my most intriguing and enlightening piece of research was into the Tarot. Leela, who is the housekeeper of ‘the Seahorse Hotel’ relies on it to give her guidance when things take a dramatic turn for the Fitzgerald family and I still like to look at the cards and rediscover what they mean. 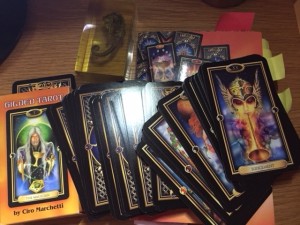 Mia Flanagan has never been told who her father is and aged ten, stopped asking. Haunted by this, she remains a dutiful daughter who would never bring scandal or shame on her beautiful and famously single mother.

So when Archie Fitzgerald, one of Hollywood’s favourite actors, decides to leave Mia his Irish estate, she asks herself – is he her father after all?

That Summer at the Seahorse Hotel is a tale of passion, jealousy and betrayal – and the ghost of a secret love that binds this colourful cast yet still threatens, after all these years, to tear each of them apart.

Adrienne Vaughan has been making up stories since she could speak; initially to entertain her sister Reta, who never allowed a plot or character to be repeated – tough audience. As soon as she could pick up a pen she started writing them down.

It was no surprise that Adrienne grew up to be a journalist, diving headfirst into her career after studying at the Dublin College of Journalism. These days she is recognised as a talented author and poet, having published several highly-acclaimed novels and an award winning collection of short stories and poetry. That Summer at the Seahorse Hotel is her fourth novel.

Adrienne lives in rural Leicestershire with her husband, two cocker spaniels and a rescue cat called Agatha Christie. She still harbours a burning ambition to be a ‘Bond girl.’