Brittany has been reading Muffy & Valor by Karl Beckstrand 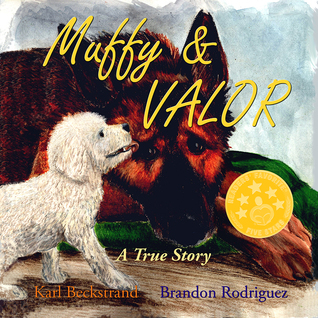 Muffy and Valor: A True Story is an illustrated children’s book about two dogs.  The story especially excels in the character development of Muffy, a small dog who lives in fear of other dogs after she is seriously injured by a dog bite. The book successfully creates a heartwarming ending about the importance of friendship and trust that I enjoyed discussing with the four-year-old with whom I read the book.

The plot has a clear and well organized progression.  The opening page read awkwardly for me, especially the following line: “[Muffy] really loves her friend Carlos (almost as much as she loves cheese).” Afterwards the rest of the story read quite smoothly. The illustrations are unusually dark for a children’s book.  I read the Kindle edition and had trouble seeing detail in the dog’s expressions.  The four year old who I read the book with enjoyed seeing all the illustrations of the dogs and liked talking about the emotions on the dog’s faces.

The events in the story follow true events that happened during the author’s childhood.  The book is marketed as nonfiction, but the fact that the events in the story really happened did not enhance my reading of the story. Emotions and cognition are attributed to dogs in the story, so “Based on a True Story” would be a more accurate description for Muffy and Valor rather than “A True Story.” Overall, this is another solid piece of children’s literature from Karl Beckstrand. As always, he includes a positive moral lesson in a well written story.

(Nonfiction, dogs) After a painful injury, a little dog named Muffy learns empathy for a German shepherd that has been hit by a car. Illustrated dog book teaches compassion, friendship, courage, and trust (kids ages 4 – 7). 700 words in dyslexic-friendly font.

Karl Beckstrand is the award-winning and bestselling author of 18 multicultural titles and more than 50 e-books (reviews by Kirkus, The Horn Book blog, School Library Journal, ForeWord Reviews). Beckstrand earned a B.A. in journalism from BYU, an M.A. in international relations from APU, and a certificate from Film A. Academy. Once a technical recruiter in Silicon Valley, Beckstrand’s early work was produced by two publishers (the first died the day they were to print his book!). Since 2004 he has guided Premio Publishing & Gozo Books. An engaging speaker and workshop facilitator, Beckstrand has experience in high tech, public policy, film, and broadcasting. He teaches media at a state college—including TV/radio scripts and Web content—and contrasts traditional publishing with digital book publishing. 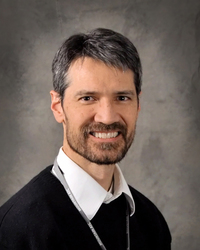