Terry has been reading A Tincture Of Secrets by William Savage 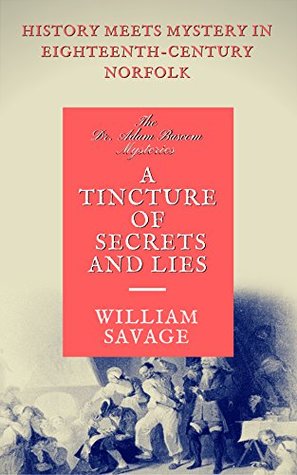 A TINCTURE OF SECRETS AND LIES by William Savage

An 18th century murder mystery, the 4th in the Adam Bascom series.  Stands alone, but I would suggest reading the earlier books first, to become acquainted with Adam and the other players in his world.

The first 35% or so of this novel takes place in the bedroom of our hero, the Norfolk doctor and crime solver; he is suffering from dire injuries following an accident, and, whilst recovering, is brought news of foul deeds and heinous crimes that deserve his attention.  Anyone who can hold my attention with the first third of a novel set in one room (and I read every word) is worthy of applause ~ indeed, in many ways, this is the best so far of Mr Savage’s novels.  As well as the nicely plotted murder mystery, he has included more scene-setting, more detail about the day-to-day living of the time, and the history of the area; North Norfolk is particularly close to my heart, and the setting of his books is part of their appeal for me.

The story brings to life so well the class hierarchy of the time, and tells how for the inhabitants of coastal villagers, involvement in smuggling was a way of life; I’d love to read another Bascom book based around this.  It also shows how those in power in England were concerned that the rebellion of the French peasantry would influence those in this country to rise up in the same manner.

With Adam housebound, the novel needed to step outside his Aylsham house eventually, to add drama, and I was pleased to see some chapters from other characters’ points of view: Ruth Scudamore, who is absolutely my sort of girl (she has no time for fripperies and society trivia), her brother Charles, who finds himself far outside his life of genteel leisure when he joins in a military attack to stop a scuffle with a group of rebels, and Adam’s groom, William, sent to uncover a mysterious ‘quack’ who sells his elixirs to the gullible public.  I was also very impressed by a chapter written from the point of view of rebel Peter Gort, who sees himself as a swashbuckling hero of the underclasses.

I was slightly underwhelmed by the wrapping up, and would have liked to see the baddies get their comeuppance(s) rather than just hearing about it in reports and letters, and just a bit more drama and impact, but I still thoroughly enjoyed the book ~ and the delightful way in which it ended: will Adam’s romantic life unfold as he wishes, after all his doubt and frustration?  I look forward to the next episode, to find out!

The night of April 13th, 1793 has proved unlucky for at least two people. Dr Adam Bascom has been thrown from his horse to lie injured, unconscious and alone on a remote country roadway. Barely a mile away, another man is thrusting the body of the young woman he has just murdered as far under a hedge as he can. Thus begins one of Adam Bascom’s most complicated mysteries; one that will end in many more deaths and a fight off the coast of Norfolk between a navy frigate and a French privateer. Trapped at home by his injuries, Adam still finds ways to use his friends and family as his eyes and ears as he uncovers the solution to a series of local murders — and a plot to destabilise the country as it awaits the threatened invasion by the French revolutionary government.