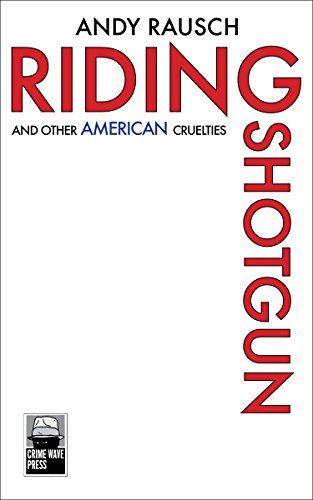 RIDING SHOTGUN and other American Cruelties by Andy Rausch

This is a collection of three novellas, and I enjoyed them all.  I really liked Andy Rausch’s writing style, it’s right up my street; very current, intelligently witty, sharp and observant.

The first one is Easy-Peezy, set in 1920/30s America, about Emmet Dalton, a former bank robber of the late 19th century who has hung up his boots and holster, but longs to show young guns like John Dillinger how it’s done.  He teams up with a couple of others from the same era and sets off for one last crime spree.  On its own, I’d have given this 4*.

The second, Riding Shotgun, is about a writer who find himself involved in a life of crime after his wife is killed.  I liked this one slightly less, as at times ‘darkly humorous’ crossed the border into ‘just daft’, although it was still well-written.  3*.

The last story, $crilla, is easily the best, I loved it.  Almost totally dialogue, and hilarious, easily 5*.  Two unsuccessful gangsta rappers hatch a plot to extort money from their reluctant producer.

The language, particularly in the last one, would not suit anyone who finds authentic street talk offensive; if you don’t, and can appreciate how well-observed it is, you’ll love it.  I felt the influence of certain TV shows and films, throughout, even in some specific lines, but I quite liked that about it.  It’s a good collection, professionally presented, and worth getting for the last one alone.

RIDING SHOTGUN AND OTHER AMERICAN CRUELTIES is a unique collection of quirky, Tarantinoesque crime novellas, representing three very different sub-genres. In the first story, “Easy-Peezy,” a band of elderly Old West bank robbers return to their wicked ways robbing banks in the 1930s John Dillinger era. The second story, “Riding Shotgun,” is a bitter tale about a man pushed to the limits of human endurance and forced to take up arms to protect those he loves. The third tale, “$crilla,” is an urban crime fantasy in which a fledgling hip-hop group kidnaps a record mogul in the hopes of finally making the kind of loot they’ve always dreamed of.

Andy Rausch is a freelance journalist, celebrity interviewer, and film critic. He is the author or co-author of nearly twenty books on the subject of popular culture. These include Making Movies with Orson Welles, The Films of Martin Scorsese and Robert De Niro, and The Wit and Wisdom of Stephen King. He is also the author of the novels Elvis Presley, CIA Assassin, Mad World and Bloodletting: A Tale of Revenge. He has also worked as an actor, film producer, composer, casting director, and as the screenwriter of the cult film Dahmer vs. Gacy. He is a regular contributor to Screem magazine, and his work has appeared in such publications and online journals as Film Threat, Shock Cinema, and Bright Lights Film Journal. He resides in Parsons, Kansas.