Olga has been reading Silhouettes by E.L. Tenenbaum 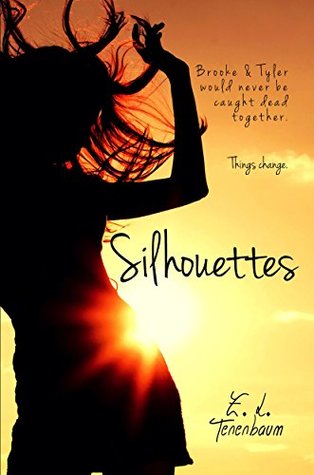 Brooke is an 18 year-old-girl who is popular (although not as popular as cheerleaders are), the captain of the dance group, a volunteer at her local hospital (in the children’s ward), a good student, a beloved daughter and sister (to her 14 year-old brother, Aaron), who has very clear plans for the future and a lot of life ahead of her, until she is killed in a car crash. She discovers then that although she is now dead, she is still hanging around, and can follow her friends and family, visit the familiar places where she used to spend her time, but she cannot interact with anybody or make herself known to the living. She meets other silhouettes (as they look like somewhat less solid and more transparent versions of themselves), but they don’t seem to have much in common with her until she meets a young boy her age, Tyler, who used to go to the same school but didn’t cross paths with her. While he knew who she was, she had never noticed him. As there is little to do other than wonder around, and neither has any idea of why they are still there, they spend time together and discover things about each other, and also about themselves.

The story is narrated in the first-person from Brooke’s point of view. Although she is angry and devastated to being with, she is also very concerned about her family and friends and tries to help but does not know how. Her memories of those around her are heart-warming and feel real. What she remembers are the little moments, not the big occasions, and she talks about her friends and family in a loving way. Although she is shocked by some of the things she discovers about others, she also gains an understanding of what is really important. She realises that she was living in a bubble and there were aspects of the town and of its people’s lives she’d never noticed. The language is beautiful and lyrical at times, without being overly complex. Tyler played the guitar and composed songs with his friend Dylan, and the lyrics of these songs are like poems, that give us a moment of pause and sometimes encapsulate and sometimes enhance the rest of the text. Although the interaction between the two characters feels true, and they remain psychologically consistent, they are both fully aware that what they are experiencing is not the same as they did when they were alive, and there is a new sense of detachment and perspective that they have been granted by their situation. Being granted time and distance to think without the pressure of trying to conform to other’s expectations is illuminating.

The relationship between Brooke and Tyler develops slowly and it is clear that they are there to help each other, even if the details are only revealed at the end. Like with some of the other secrets we discover throughout the book, I was not surprised by the revelation, but what is really important is the characters’ reaction to the revelation and that is both understandable and perfect. Although it might seem strange to talk about happy endings in a novel that centres on dead characters, I think most readers enjoy the ending and feel inspired by it.

I highlighted many sentences and paragraphs, as the novel manages to capture many of the questions we all wonder about and provides insights and inspiration without ever becoming preachy or adhering to a particular faith or religion. But here come a few one to give you an idea:

Diamonds hide in a lump of coal.

Here Brooke is talking to Tyler, trying to convince him they should go to school.

“What else are you gonna do?” I asked. “No one will see you anyway. You’re safe. They’ll walk right through you.”

Brooke observes: Words like that should never have reason to be said at all.

“You don’t need to do some momentous thing that changes the world or say things that everyone puts on wooden signs to have made a difference. It’s doing things in your way, the way you laughed, and cried, and hung out, and lived, and just were, that’s what your mark is, even if you can only find it in ten people instead of ten thousand.”

A YA novel that can be read by people of any age (there is no use of swear words, violence or sex), that makes us think (yes, and tear up too) about family, friendship, memories, and life. A positive and inspiring read I’d recommend everybody. I know many readers are wary of reading books about children’s deaths, especially those who have been touched personally by it. Although I cannot offer my personal perspective on the matter, I’d suggest trying a sample of the book before making a decision. The novel put me in mind of The Lovely Bones and I would recommend it to readers who loved Sebold’s novel but were perturbed by the most gruesome aspects of the plot. E. L. Tenenbaum is an author I didn’t know but I’ll be watching closely from now on.

Brooke was just killed in an accident, but a part of her is still here. Seeking answers, she sets out to retrace her life and soon meets others like herself, among them, Tyler. Tyler remembers Brooke from before, and so she hesitantly gives him the one thing she never bothered to when they were alive; a chance. Together, they visit the people and places in their small beach town that once held meaning to them, developing a mutual, grudging respect as they learn to view life in different and unexpected ways.

Tyler soon decides that they must let go of their pasts if anything is to change, but Brooke can’t bring herself to say goodbye just yet. As she watches the impact of her death on her loved ones, Brooke questions her desperate need to hold onto a life that’s no longer hers. But how can she let go of a life she’s barely begun to live?

A bittersweet story about family, friendship and the impact one life can have on others, no matter how young it is.

Hi! I am writer who thinks a bookstore (real or online) is the happiest place on earth!
I’m also partial to other things, like baking (cookies), musicals (though I can’t really sing) and superhero graphic novels (though I can’t really fly).
Above those, I love to write in different mediums, especially novels.
Read, share, talk about them.
Goodreads | AmazonUK | AmazonUS | Twitter