Terry has been reading The Unrivalled Transcendence Of Willem J Gyle 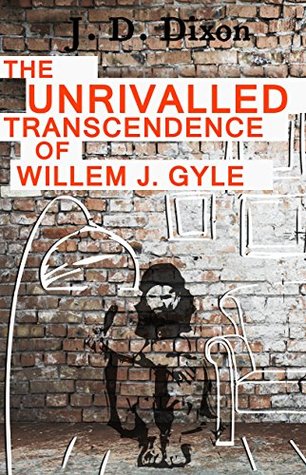 What a find.  This book is seriously good.  I mean, seriously.  I’d recommend it to anyone, whatever your usual genres of choice.

Willem J Gyle is a bit slow.  But he gets by.  He lives with his mother, who takes care of all his needs, including finding him a job on a construction site which suits his size and strength, and where he makes friends.  He loves his mam, his dog, and the football on the telly.  Then, in just a few days, his world comes crashing down, and Willem finds himself homeless.  Having neither verbal skill nor knowledge of how ‘the system’ works, he is unable to find anyone to help him, and drifts into a life on the streets and, inevitably, crime.  Much to my surprise, his darker side comes to the fore, but is this innate psychopathy, anger at the world, an expression of pain for all he has lost, or just a primal instinct for survival?  I thought it was a combination of all those elements.

Winding up in a community of other homeless people, which he considers, at first, to be ‘no more perfect place … outside the law, above the law’, he soon finds out that it’s a reflection of the ‘real’ world, corrupt, with the weaker members suffering.  And on he walks….

Although the blurb appealed to me, I was dubious at first; the book starts off well-written but whimsical, which, coupled with the too-long and pretentious title, made me wonder if it would be slow-going.  But four pages in I was completely hooked, and stayed that way until the end.  J D Dixon has a real gift, the innate sort that cannot be learned from classes, ‘how to write’ books, blog posts, or anything else.  To me, writing talent is all about being able to create characters and worlds that absorb the reader completely, needing no wordy description, and JDD has this in spades.  He writes in a spare fashion, which I like.  He doesn’t explain, or over-emphasise.

The book is raw, rough in places, and sometimes shocking. It’s also immensely sad. It’s just – great. One of the best debut novels I’ve ever read.

In a Scotland beset with depression, Willem is one victim among many. He loses his job, his mother dies and he is forced out of the flat they shared. Seeing no other option, he takes to the streets of Edinburgh, where he soon learns the cruelty felt outside the confines of his comfortable life. Stories from his past are interwoven with his current strife as he tries to figure out the nature of this new world and the indignities it brings. Determined to live freely, he leaves Edinburgh, hiking into the Scottish Highlands to seek solitude, peace and an unhampered, pure vision of life at nature’s breast.

The Unrivalled Transcendence of Willem J. Gyle is at once a lyrical, haunting novel and a set piece in the rage of an oppressed, forgotten community. J. D. Dixon’s sparse, brutal language captures the energy and isolation of desperation, uniting despondency and untrammelled anger in the person of his protagonist.

J. D. Dixon was born in London in 1990. He studied English Literature and History at Goldsmiths College, University of London, before pursuing a career as a writer. He currently lives with his wife, the psychologist Dr Lauren Hadley, in Edinburgh.