Noelle has been reading The Silver Horn Echoes: A Song Of Roland by Michael Eging and Steve Arnold 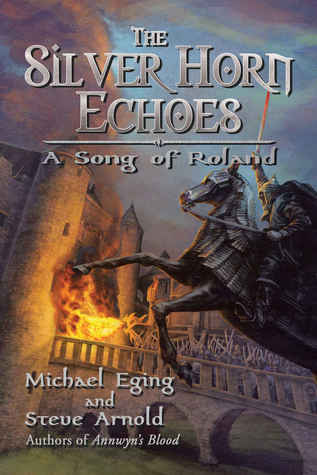 I chose to review this book because I am largely ignorant of most of the history of the Dark Ages, except for some marginal knowledge of Charlemagne, King Charles the Great. However, I am acquainted with The Song of Roland (La Chanson de Roland), an epic poem based on the Battle of Roncevaux Pass in 778, during Charlemagne’s reign. It is the oldest surviving major work of French literature. This book is an homage to that epic.

The Dark Ages was a time of great turmoil and the collision of empires. As the young Frank kingdom, led by King Charles, prepares to defend itself against the Saxons in the east, Roland, heir to the Breton March, has been relegated to guard duty. Everything changes when a foreign emissary entrusts him to bring Charles vital word of a new threat to the kingdom from a Muslim invasion from the south. Roland joins the king’s retinue and discovers there are traitors plotting regicide within the peerage and knights. Roland is well-acquainted with one of them – his step-father, whom he suspects of killing his father on the battlefield to assume his lands and take Roland’s mother as his wife.

The story is written from an omniscient point of view, which sometimes breaks the train of the main story, but is necessary to understand the many obstacles faced by Charles as he works to hold his kingdom together. Nevertheless, the focus is on Roland’s development into a great warrior and the right hand of Charles, along his deepening love for the sister of his good friend and the plots of his step-father and others who desire to seize the throne. It revisits an age of court intrigue, chivalry and valor, the clash of arms, and a final, fateful decision made before the Battle of Roncevaux.

I enjoyed this book. It is filled with superb medieval historic detail as it pulls together various threads in the life of King Charles and Roland. I particularly liked the visitations of Roland’s father William in ghostly form, to advise Roland and counsel him. While Charles remains a less formed character, Roland’s progression from an impetuous youth seeking revenge to a canny and powerful warrior is well limned. Most of the other main characters – the stepfather Ganelon and his equally treacherous son Gothard; Saleem, the son of Marsilion, the Muslim king; Oliver, Roland’s good friend; Aude, Oliver’s sister and Roland’s love – are also three-dimensional and unforgettable. There are many minor characters, related to various aspects of the story, who require vigilance on the part of the reader to keep in mind, but they added to the richness of world the authors have created.

The Silver Horn is reminiscent of the stories of King Arthur, with courtly love, knightly honor and dark treachery; it also reminds me of a favorite book of my youth, Ivanhoe. The unrelenting battle scenes, although a necessary part of the story, can be overwhelming: their descriptions are not for the faint of heart and bear witness to the brutality of waging war in medieval times. I could still hear the clash of swords and the screams of dying men after I put the book down.

With its sacrifice and loss, the ending was deeply affecting, and the discovery of the silver horn in the distant future was reassuring testament to the endurance of Roland’s legend. This is a truly epic tale which will resonate with many readers and which does honor to La Chanson de Roland.

The Dark Ages—a time of great turmoil and the collision of empires!

As the Frank kingdom prepares for war, Roland, young heir to the Breton March, has been relegated to guard duty until a foreign emissary entrusts him with vital word of a new threat to the kingdom. Now Roland must embark on a risky journey to save all he loves from swift destruction.

And yet while facing down merciless enemies, he must also reveal the hand of a murderer who even now stalks the halls of power and threatens to pull apart a kingdom reborn under the greatest of medieval kings, the remarkable Charlemagne.

For Roland to become the champion his kingdom needs, he must survive war, intrigue and betrayal. The Silver Horn Echoes pays homage to “La Chanson de Roland” by revisiting an age of intrigue and honor, and a fateful decision in the shadows of a lonely mountain pass—Roncevaux!

Michael Eging wanted to write since he was very young. His earliest memories are of carrying a battered old notebook around full of illustrations and stories. While in college, he was inspired by professors and visiting writers. Literary classics such as Song of Roland and Inferno were often in his backpack, along with Russian textbooks. Recently, Eging has pursued an interest in writing screenplays for feature films with his first option being The Song of Roland. He continues to focus on a variety of script/movie projects, most recently a horror thriller, Feast of Saint Nicholas, and a political thriller, The Prince. He lives in Northern Virginia with his wife, Lori and his children.

Steve Arnold grew up on a farm in Northeast Ohio where he spent his free time reading Burroughs, Lovecraft, Zelazny and Tolkien, and his earliest writing efforts were creating adventures for his Dungeons & Dragons group. After several years of supporting his family through blue-collar jobs he joined the military and returned to school in his thirties, obtaining a BS in mathematics and then an MD. A veteran of the Army and the Navy, he is currently a Family Medicine physician near his hometown where he lives with his family, their dog, cat and two geckos, and relaxes by creating pencil illustrations, working on other literary projects with Mike Eging, and dreaming of building an airplane.

Eging and Arnold have previously co-authored Anwyn’s Blood, a dark fantasy tale with elements of the undead.