Olga has been reading Do You Realize by Kevin Kuhn 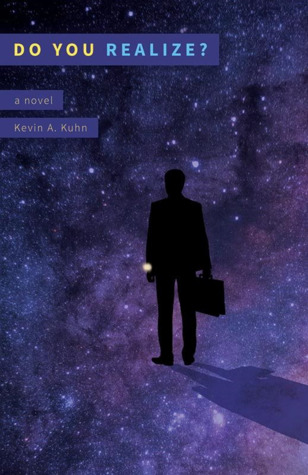 I’m reviewing this novel on behalf of Rosie’s Book Review Team. Thanks to Rosie and to the author for this opportunity.

It is a bit difficult to categorise this story. It is not straight science-fiction, although there are sci-fi elements (a strange app that allows people to travel between dimensions and parallel universes), elements of family drama (a man in crisis who can no longer stand his job, whose teenage children are having difficulties, whose relationship with his wife is starting to suffer, and who experiences a number of tragedies in his life), and much discussion about the philosophy of life, humanity, the future, and matters that could fit into the category of spiritual and inspirational literature.

The novel follows the story of George, who has a managerial position in an insurance company but hates his job, and whose whole life seems to have lost its zest and momentum. He meets a man in the train, Shiloh, who asks him interesting questions (all related to song titles that also serve as chapter titles) that make him think and who keeps challenging his beliefs. At some point, he gives him an Apple watch and tells him to test an App of his creation. This App allows him to travel to his own past, only it is not his real past. He can travel to a parallel dimension and relive a day in his life, but instead of his real life, it is the life of a different version of him in that dimension. So his experience in that world is not necessarily the same but it has many points of contact with the one he already lived through. Whatever happens in one version of the world does not impact another. Although to begin with, he travels with the intention of changing things in his present, he soon realises that is not possible. He becomes frustrated as he is not sure why he has been chosen or the whole purpose of the experiment and Shiloh is less than forthcoming. George needs to come to terms with what his life is really about and learn what is really important.

There is nothing peculiar or remarkable about George at first sight. He loves his wife, Elena, a stay at home mom, but their relationship has become lost in everyday tension, problems, and stress. He is not particularly insightful and his life does not appear to be important. It is not evident why Shiloh has chosen him. Perhaps the fact that there is nothing particularly remarkable or peculiar about him is intended to make the readers find it easier to put themselves in his shoes and follow the process, as he is a very familiar and recognisable character, even if we do not share his personal attributes or his life story.

I liked the interaction between George and Shiloh and the fact that he was a pretty mysterious but engaging character. I liked his T-shirts (always with funny puns on Physics-related subjects) and his enthusiasm. His interactions with George were definitely more tell than show, and they made me think at times of Philosophy treatises, like Plato’s Dialogues, even if the ideas were based more on concepts and theories of modern Physics, Ethics, music, and even sports.

The novel is divided into a number of sections. First, we have the conversations between George and Shiloh that I found illuminating and fascinating, although at times they could be frustrating and somewhat repetitive; especially when George seemed a bit slow in understanding some of the ideas and the concepts.

Second, we have George’s everyday life, where we get to know his wife, and his daughter, and son, although I felt I knew more about the children than about the parents, particularly George. That is likely due to the fact that the story, although told in the third person, is told mostly from George’s point of view (until the very end of the novel, where we see Shiloh’s perspective), and although he shares some memories, he reflects and thinks more about his family than he does about himself. They are all nice at heart and, in many ways, their problems are very much those of a fairly privileged society, until tragedy strikes.

Third, we have the chapters where George travels in time and he starts to realise what his life is really about.

And last, but not least, there are the dreams. One of the side effects of those trips are very vivid and weird dreams and these seem to be consist of visions of what most of us would think time travel would be like, as these dreams take him from prehistoric times to a faraway future.

Although I was not sure how connected I felt to George’s character, towards the end I felt engaged with him and his family (perhaps because I could personally relate to some of the things they go through as a family). Although it was more of an intellectual experience than an emotional one for most of the book, I did become attached to the family by the end. And the book gave me much to think about.

The book reminded me a novel I read not long ago, The Beauty of the Fall by Rich Marcello (you can check my review here), and although the stories and the writing styles are quite different, both of them went beyond the plot to question much bigger things.

The novel flows and ebbs. It is not a fast read, but it is an engaging one and I wanted to keep reading, intrigued, like the protagonist by what Shiloh would come up with next. I did not find his explanations of physics, ethics, and other concepts complex to understand and, apart from some moment of irritation when George seems to find it difficult to accept and understand what is happening, I found the style of writing easy to follow, with heavy moments and some lighter ones, and I thought the balance between the theoretical discussions and the life drama was well-achieved for most of the book.

I’d recommend this book to people looking for inspiring books and books providing bite-size information about recent theories in Physics, Ethics, and views of the world we live in that will make them think about the future and reconsider their priorities. I think lovers of music (Rock and Roll in particular) and sports will enjoy it in particular.This is not a book full of action for those who love adventures, or a standard sci-fi book, so I’d recommend readers to check a sample of the book and see how they feel.

George is a middle-management, middle-class, middle-aged guy who hates his job and struggles to stay connected to his wife and teenage children. Most guys might end up with a steamy affair and a flashy car for their midlife crises, but George gets a quirky philosophical physics professor named Shiloh. Trapped with this mysterious misfit on his morning commuter train, George is dragged into awkward conversations about love, fear, music, and the meaning of life. Shiloh also asks George to beta-test an app he wrote for the new Apple Watch–and with a free watch included, how could he say no?

When tragedy strikes, throwing George out of his uncomfortable comfort zone, he learns that Shiloh’s app lets him journey through alternate versions of his past. As challenges mount in his own reality, George must make a decision that will change him–and possibly the entire multiverse–forever.

Kevin Kuhn lives in Eden Prairie, Minnesota, with his wife Melinda, three children, and two fierce schnoodles. He is a technology executive who enjoys sipping cheap bourbon, avoiding yard work, and living vicariously through his children’s sports. While Kevin has no musical skill whatsoever, he appreciates a broad spectrum of artists from Pink Floyd to Prince and Radiohead to the Rolling Stones. His golf game is horrific with flashes of mediocrity.