The Lost Corner by Katrina Mountfort
My rating: 3 of 5 stars

It is the week before Christmas, and Eve discovers that her husband is cheating. She packs up and leaves without a showdown, preferring instead to run away. The road takes her back to her childhood county of Norfolk and she settles in the coastal town of Seaton.

Eve finds lodging in a flat above an art gallery. Owner Lucas and his sister, Maria, offer Eve friendship, even including her in their pagan meetings. She meets seventeen year old Justine, who self-harms and reminds Eve of her own daughter. This makes Eve desperate to befriend Justine and offer her help.

In time, Eve makes a decision about the family she left behind and the new life she’s been making in Norfolk, but not all her good intentions work out as she hopes.

This book is a complex mix of modern dilemmas and old beliefs. It’s a emotional sort of book; Eve is badly hurt and she is carrying baggage from another devastating family issue; for much of the book her entire outlook on life is negative. Added to this are the painful stories of many of the other important characters, each with their own story thread.

Maria, was one of my favourite characters; her pagan beliefs, extravagant dress sense and direct mannerisms made her stand out, and I’d have loved her to have a larger role in the book. I would also have enjoyed learning more about Eve and Lucas, perhaps from more character-building explorations or scenes portraying the emotion between them, so I could empathise with them more

I had a few queries about the plot itself and my copy was in need of another proofread, but I believe the errors should have been rectified by now. I liked the pagan thread, and the detail about the Norfolk myth was very interesting indeed, but would have liked a bit more positivity to balance out all the sadness.

Eve leaves behind her comfortable, suburban lifestyle when she discovers her husband’s infidelity, and returns to her Norfolk roots to rebuild her life. She feels instant belonging among the village pagans and eccentrics. But in a village of dark secrets and past tragedies, she finds more questions than answers:
Will enigmatic artist Lucas ever recover from the death of his wife eighteen years earlier?
What happened to troubled Justine’s mother, who disappeared around the same time?
Will Justine succeed in her bid to find the woman who abandoned her when she was a baby?
Why is charismatic local MP Sebastian being so friendly to Eve?
When tragedy strikes the community once more, Eve’s popularity plummets. Did she bring Black Shuck, the fabled harbinger of death, to the village? And is Eve’s involvement with the villagers a way of avoiding facing up to her own family troubles?

I was born in Leeds. After several years collecting qualifications, I started work as a scientist. My philosophy of life is that we only regret the things we don’t try, and my career reflects that. So far, I’ve been a civil service scientist, homeopath, forensic science researcher and currently work as a freelance medical writer. In that time I’ve lived in Liverpool, Ipswich, Norwich, London and now live in Saffron Walden with my husband and two dogs.

When I reached forty, a close friend died of cancer. It made me realize that we never know when life is going to be snatched away from us; we can’t put off our dreams forever. The writing bug that had been dormant since childhood started nagging at me. I began my first novel, Future Perfect, and finally completed it eight years later! My loves in life include my husband, family and friends, two occasionally criminal dogs, travel, music, wine, dark chocolate, Parma violets and daffodils. 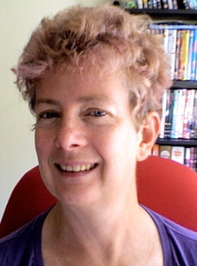