Lilyn has been reading Chimera Catalyst by Susan Kuchinskas 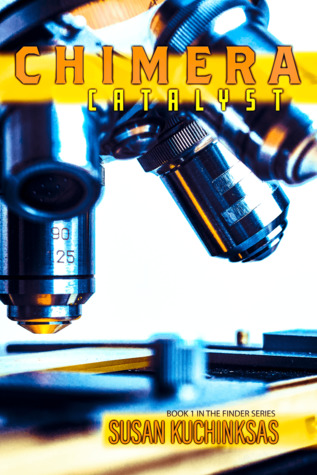 I could see the world of Chimera Catalyst as Kuchinksas first describes it. Isolated, frenetic, selfish, busy. It’s a future world that feels very near future. There are lots of brand/company names tossed about that most people will recognize now. And the ones she makes up fit right in perfectly. The slang, the body modifications, et cetera, are all very fitting developments. The social media, social identities, and currency are all very apt. Apart from the technology, there is also the way the world has adapted to it’s new state after we hit the tipping point with climate change. In short, even I had a bit of trouble with the story itself, the world she established was one of the most believable near future worlds that I’ve read in a long time.

Susan Kuchinksas has a way with descriptions in Chimera Catalyst. There were several times she definitely drew a snicker from me as I did a double-take on one of her lines. Quips like “She looked like something that should be clinging to a damp tree” were great. At the same time, her descriptions of some of the Arcotypes were fantastic. The one character reminded me of the main aliens from Valerian and the City of a Thousand Planets. She gave just enough detail to fill in the broad strokes while your imagination did the rest. Her descriptions of the clones were disturbing, and almost every time they were on the page I was thinking of the mannequins from Silent Hill.The Parrot was especially neat. It gave a whole new meaning to the word “Birddog” and I was attached to the little booger by the end of the novel.

Chimera Catalyst is a busy book, and a quick read. It comes in at under 200 pages, but there’s a lot of story for such a little book. It starts off simply enough when the Finder gets hired to find a girl. Soon, though, he finds out she’s just not any girl, and from there he gets deeper into a mess he’d rather have not touched. A conspiracy, a mystery, and various power plays all make the Arcotype case a lot more interesting than he thought it would be.

The Finder is an interesting character. In many ways he’s typical, but he’s also not. Many detectives in these types of books are addicted to something, but The Finder’s addiction to chemicals is different. He’s not drinking himself under the table or anything like that in Chimera Catalyst. His medicinal usage seems to fit with the world around him. You imagine everyone being very blase with how they medicate to sleep and live instead of him being a special case. His ‘voice’ in the story is well-defined. The Finder is a good guy, but he’s definitely not a hard-nose ex-police type. He is also forced to look twice at himself and his actions in regards to one particular thing during the course of this novel, and he’s not happy with what he finds. I appreciated that.

There was one line I really liked in the book, just because it kind of made me sit back and think “Truth”. It’s when The Finder is talking about the Parrot. (It’s in the first few pages.) Specifically, he’s talking about why he made him, and he says: ‘Here’s why I made him: because I could. Because I wanted to.’

That unapologetic shrugging off the creation of a new life form seemed so appropriate to the image of science that so many people have. It’s a sentiment that’s echoed in several books and movies “You did it because you could”, but it’s rarely the creator themselves that admit to it. It’s generally someone else saying it to them. The Finder, however, owns it without any reservations just then. He did it because he could. Because he wanted to. That was all there was to it.

Overall, Chimera Catalyst is a good sci-fi mystery read. The plot was interesting enough, but it was in The Finder and the world where Kuchinskas’ talent really made itself known. This is definitely a great start to a series, and I could see myself picking up at least one more in the series in the future. Especially to find out if anything happens to the Librarian!

Disclaimer: I received a copy of this book via Rosie’s Book Review Team from the author for review consideration.

When Finder is hired to locate charismatic, green-haired Miraluna Rose, it seems like an easy job. Crack into corporate databases, brew up some biologics to enhance his thinking, and get the job done with the help of the Parrot, a bird/dog chimera with the finest traits of both species.
The search takes Finder and the Parrot to the sun-broiled streets of Laxangeles, the canals of Seattle and the weirdly mutated vegetation of the Area. It turns out that it’s not a simple missing-person case after all.
Finder discovers that ReMe, a corporation providing medical cloning services, is illegally breeding human/animal chimeras. ReMe is selling these exotically beautiful female creatures, branded as ArcoTypes, as playthings to the wealthy and ruthless.
Miraluna Rose is its finest creation, but she has other ideas. She’s holed up at Refuge, a haven for runaway ArcoTypes, where she’s planning a future of freedom for her sisters.
To help the ArcoTypes fight ReMe, Finder and the Parrot will need the help of a couple of sympathetic AIs, the CEO of the world’s largest advertising company and a posse of highly modded, celebrity-crazed media kids. 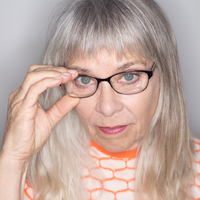 As a kid, Susan Kuchinskas spent hours catching toads, watching rabbits and starting ant wars — and reading, reading, reading.
She’s never lost her love for creatures of all kinds. In fifth grade, she discovered the bookmobile’s science fiction section and read nothing else until she got to college.
After the usual writer’s mix of odd jobs – gogo dancer, housepainter, office temp – she happened into journalism. As a technology journalist, she covered the rise and fall of the dotcoms, the move to digital and mobile, and the ascendance of social media.
She’s the author of two previous books, Going Mobile: A Guide to Real-time Mobile Applications that Work (CMP Books 2003), and The Chemistry of Connection: How the Oxytocin Response Can Help You Find Trust, Intimacy and Love (New Harbinger 2008).
Her short stories have been published in anthologies and journals including Deep Space Dog Fight and Chicago Literati. This is her first novel.
To exercise the parts of her body and mind that don’t get a workout from writing, Susan is an organic gardener, beekeeper, sculptor and DIY re-modeler. She enjoys uncovering exotic cultures at home and abroad.
She lives in the San Francisco Bay Area with her mate, Mike, and their socially challenged dog and super-chill cat.