Anita has been reading Blessed Mayhem by Sue Coletta 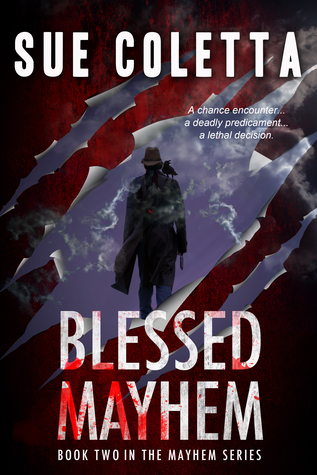 This is the second book in the Mayhem Series, starring the inimitable Shawnee Daniels in another brilliant crime thriller set in Massachusetts, USA.

Shawnee is an unlikely hero, with a heart of gold and a vocabulary to shame the devil. She encounters a serial killer during one of her rare nightly forays as a burglar, triggering both his interest and his fascination.

What follows is an unusual relationship between them. Fast and witty, the dialogue between them will make your head spin. Mr Mayhem, as Shawnee calls the killer, is a remarkable man. Intelligent, elegant, with a wicked sense of humour. Totally, unlike any serial killer I have ever read about, and the perfect foil for the smart and quick witted Shawnee Daniels, occasional burglar and computer specialist for the Police Department.

You are not supposed to like serial killers, but you will love this one, especially the relationship between him and Shawnee. There are so many good things in this story, from the hilarious antics of Mayhem’s three pet crows, to the detailed description of the intricate world of computer hacking.

This book has it all, fast action and twisting plots that will literally keep you gasping for air as the tension grips you by the throat.

The ending was intriguing, but slightly disappointing. This only made me want to read the next in the series!

A chance encounter …a deadly predicament …a lethal decision.
The infamous Mr. Mayhem is not your average serial killer. Reminiscent of the beloved Hannibal Lecter, minus his thirst for flesh—because eating humans is just plain rude—Mr. Mayhem storms on the scene with style, grace, elegance, and a zest for life unlike any other. Impeccable manners also help. He may commit murder, but there’s no reason to be impolite about it.
Accompanied by his loyal crow companions, Poe, Allan, and Edgar, his crimes strike fear in the hearts and minds of folks across Massachusetts’ North Shore. When Shawnee Daniels—cat burglar extraordinaire and forensic hacker for the police—meets Mayhem in the dark, she piques his curiosity. Sadly for her, she leaves behind an item best left undiscovered. Or is it serendipity by design?
Color him curious, but he yearns to examine the psychology behind her life choices, tough girl routine, witty banter, and unique double-life. In a different time and place they may even become friends. But unfortunately, their predicament defines the risk.
The stakes are too high to stop now.
For reasons authorities cannot fathom, these seemingly unrelated murders will go down in history as the most impressive killing regime of all time. His coup de grace, if you will. Even if it means permanently erasing Ms. Daniels from the equation. All the pieces are there if the authorities look hard enough. The question is, will they? The only new wrinkle is Shawnee Daniels, and she may be his toughest opponent yet …if she’s clever enough to play the game.

Member of Mystery Writers of America, Sisters in Crime, and International Thriller Writers, Sue Coletta is an award-winning, multi-published author in numerous anthologies, and her forensics articles have appeared in InSinC Quarterly.
In addition to her popular crime resource blog, Sue’s a radio host—check out “Partners In Crime” on Writestream Radio Network, Blog Talk Radio—the communications manager for the Serial Killer Project and Forensic Science and founder of #ACrimeChat on Twitter.
Sue lives with her husband in New Hampshire, surrounded by the sultry sounds of nature.