Cathy has been reading Wolfsangel by Liza Perrat 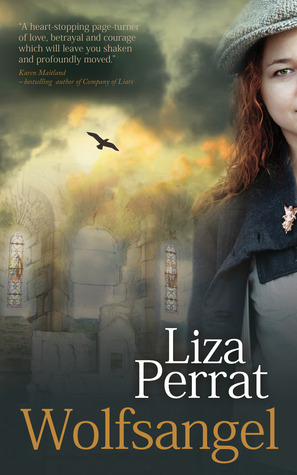 We first meet Céleste Roussel as an elderly lady attending a memorial ceremony with the remaining survivors of their village, along with their families. The atrocities and personal losses of WWII still weigh heavily and as Céleste reads the engraved names she is assaulted by memories, the decisions she made, actions she took, the feelings of guilt and sorrow which never truly leave her. Her granddaughter now wears the bone angel talisman passed down through the women of her family for generations.

This second book in The Bone Angel trilogy tells of Celeste’s life in Occupied France. The story, narrated by the young Céleste, gives a personal account of her experiences, as Lucie-sur-Vionne suffers under the rule of German forces. Her father had been taken to work for the Reich, her mother’s income was supplemented by her herbal remedies and her role as ‘angel maker’. Céleste and her mother have a difficult relationship, both are harbouring dangerous and traumatic secrets.

Céleste’s brother, Patrick, is a Resistance fighter with their friend, Olivier, and her sister, a nun, hides Jewish fugitives at the convent. Headstrong and sometimes reckless, Céleste wants nothing more than to fight for France and after proving herself a worthy candidate, she travels to Lyons to join the Resistance. Her courage is tested to its limits with tension filled exploits driven by anger and revenge. All leave their mark but through it all she grows and develops.

Based on historical fact, this powerful and skilfully written tale depicts the dangers, hardships and turbulence experienced by those who lived through the Occupation. Atmospheric and vividly descriptive, we see what an intense and far reaching effect it has on those subjected to unimaginable callousness and fear. The last horrific atrocity carried out by the Germans as the war comes to a close is the most horrendous and leaves Céleste with the literal and figurative scars that will haunt her throughout her life. A moving and tragic end to the story, made especially so by the author’s note at the end of the book.