Noelle has been reading Speed Bump Himalayas by Mark Giblin 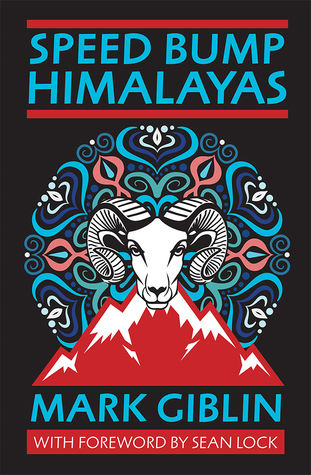 The reader knows there will be some fun in this book from the introduction by Sean Lock, a well-known British comedian who just happened to share a part of this travel adventure with the author. However, this is definitely not your average travelogue: it is gritty and horrifying for much of the time.

I will admit I was not entertained – except by the humor – for the first third or so of the book, which was basically the wanderings of a 20- something young man and his friends on a drug-infused trip through India and Nepal in the late 1980s. However, I was drawn in to Giblin’s gruesome story of survival, trekking out of the Himalayas, and his equally disturbing and unpredicted recovery from the undiagnosed illness that drove him home. Quite a contrast. The dry jocularity made it all palatable and ultimately, a page-turner.

Mark’s adventure begins at a time when young Englishmen were drawn to India and Nepal with the promise of cheap drugs, free love and high adventure. He is traveling solo in Nepal and in a dumb and dumber move, decides to cross a glacier with only his slick-soled shoes and no other equipment. He nearly loses his life escaping the glacier, but his adventures in India and Nepal send him home to earn enough money to return. He talks his friend Sean Lock into accompanying him, but they choose the wrong time of year for their trip. Sean becomes nearly unhinged when they arrive in a steamy, humid, pre-monsoon Dehli. When the two go looking for fellow travelers, liquor and drugs, all they find is boredom, mosquitoes, and snakes with nothing but humor, getting high and/or drunk and the occasional book to keep them occupied. Until they reach Katmandu…

Once there, with Sean healed from a bout with what is nicely described as arse-boils, they decide to try a four-week trek into the mountains, even though Mark is not feeling quite right. By the time they are halfway to their destination, Mark is feeling bad enough to send Sean to continue on his own. What began as ‘not feeling right’ turns into monumental pain and frightening, continuous loss of body fluids. At this point, it became a book not to be put down, even though you know the author survives.

I had my suspicions about what he suffered from, but that’s because of my medical background. Turns out I was close, but not quite on spot.

I was awed by Mark’s bravery, humor and determination to survive despite the increasing odds that he wouldn’t. The story of how he managed to get back to England in incredible pain, with no sleep, no food and little water, and most especially without any treatment (there were no MDs qualified to treat him) is unbelievable. His ability to make interesting observations, find kindness in strangers and even make fun of his situation may have helped him survive and definitely helps the reader! Even after getting to a hospital at home did not guarantee his survival, as his treatment threatens to kill him.

This book begins as a series of travel misadventures, but quickly morphs into a remarkable journey, seasoned with dry humor, and a testament to the human spirit, which runs strong and true in the author.

It’s 1986. Mark Giblin discovers the ideal escape from the brawling pubs and concrete towers of Thatcher’s Britain.
India. Its vast scope for travelling mayhem suits Mark perfectly. His mate – a young Sean Lock – joins him after a carefully plotted eviction from acting school.
Once Sean regains his senses from landing in steaming hot, pre-monsoonal Delhi, the pair stumble aimlessly through Kashmir and Nepal. But on a remote mountain track, Mark discovers something far worse than the terrifying boredom of English suburbia, and is thrown headlong into a journey few could survive.
Speed Bump Himalayas will have you in stitches and tears as Mark charts the true tale of his remarkable journey, and his is fight to stay alive.

Speed Bump Himalayas has a forward by the English comedian Sean Lock. I had to check him out on You Tube, and he IS hilarious. It seems he shared this adventure with the author Mark Giblin, and I am glad he survived to write about it!