Today’s team review is from Eleanor, she blogs here http://www.eleanorsauthor.com/

Eleanor has been reading Beloved Besieged by April Munday 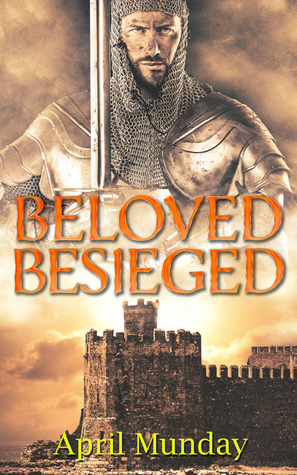 “Limoges 1364 – After Elaine is rescued from a rioting mob by Joscelin, a handsome English pilgrim, neither expects to see the other again. Out of sight proves not to be out of mind, however, nor out of heart. Their unspoken love for one another continues to grow over the years they’re apart. When their paths cross again, Joscelin is a soldier in the army laying siege to Elaine’s home. He has to get to her before anyone can harm her… or worse.”

This was a really lovely, compelling and heart-warming tale of courtly love set in the height of the Middle Ages. All the characters were beautifully rendered and relatable. April’s well-researched narrative draws you into the medieval world seamlessly as the world building is perfect. All the contemporary tales of courtly love exaggerated romance and idealised love, placing a woman on a pedestal to be worshipped from afar – and this is exactly what Joscelin does to Elaine. It takes him time to realise his own feelings and to accept that Elaine can actually be his wife.

What I really loved was the very pure and chaste way in which Joscelin and Elaine loved each other. Joscelin is unlike many other contemporary knights; not only did the couple have to overcome physical logistical and emotional obstacles to be together, they also had to overcome their own ignorance and innocence. I think we forget in this day and age with sexual information and facts readily available how people previously discovered their own bodies and other peoples’ in a sexual context aside from actual experience. This was really tastefully explored and was also skilfully interwoven with a family scandal. It also nicely juxtaposed with religious considerations and how a knight who describes himself as “good at killing” can be a better person than a man of the cloth.

It was a thoroughly enjoyable afternoon reading this novel and will happily recommend to other historical romance fans.

Can an army keep them apart?
Limoges 1364 – When Joscelin saves Elaine’s life in a religious riot neither expects to see the other again. Six years later Joscelin returns to Limoges with an army and lays siege to Elaine’s home. When the army enters the town he has to get to her before anyone can harm her… or worse.

April Munday has been telling stories for almost half a century. It started as a way of keeping her younger sister entertained and out of trouble while they were on holiday.
In her early teens she started writing stories down. Many years later she finally finished one and then another.
Her stories are set either in the fourteenth century or the early nineteenth century. Her most recent novel is Beloved Besieged, set around the sack of Limoges in 1370.