Olga has been reading Bleeders by Michaela Haze 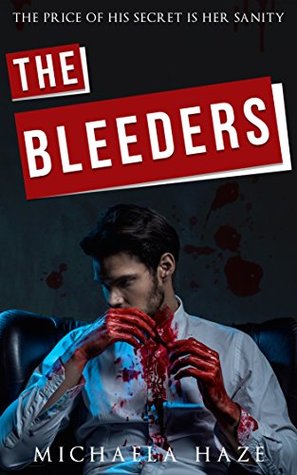 When the author contacted me, she made a very good case for me to read and review this book. A book where the protagonist self-harmed, had mental health problems and believed she was in love with an incubus and it was mutual, seemed very appropriate for me. I am not a big reader of paranormal books (I love horror, but have found that a lot of paranormal books focus more on romance and erotica, both genres, particularly erotica, that I don’t usually read). Unfortunately for me, the book had a fair amount of paranormal elements, well, the version of paranormal that I’m not so fond of and that outweighed (at least for me) the other aspects.

The story is told in several parts, always in the first person, from the point of view of Sofia (she prefers to be called Fia, and insists on it for much of the book). In the first part, we meet her when she is at a mental health facility and she is introduced to a new doctor that reminds her of a man from her past, Henry. At the insistence of this new doctor (she seems to be experiencing hallucinations, as she sees the Henry from her past and her sister, Melanie, who died some time back, while she is conversing with the doctor), she starts telling the story of how she got there.

Hers seems to be a story of grief and revenge. Sofia’s sister, Melanie, died in suspicious circumstances (of a Heroin overdose but the details are not straightforward), and she blames two men whom she is determined to get revenge on. To that effect, she visits a strange character, Henry. The rest of this part is the story of her obsession (that seems mutual) with this man she knows little about, but the more she learns, the weirder it gets. Sofia is grieving for her sister’s death, and self-harms (this part is graphic and realistic), smokes, drinks, hardly eats and seems to barely function. Her life is on a downward spiral until she meets Henry. And then things get… well, much worse. I know some readers don’t appreciate first person narrations, and although I normally don’t have any issues with them, this one I had difficulty with. Although I empathise with the protagonist’s predicament, her sudden love for a guy who is, at best a contract killer, and at worse… a demon, I did not find it that easy to understand (I know is standard fare in the genre, but perhaps that is one of the reasons why I don’t read it, as I find the suspension of disbelief a bit beyond me). Although we are not told her age, to me she seemed to act younger than the rest of the details of the story indicated she was. Perhaps it is to do with something she herself comments later in the book. She states she cannot remember who she was before all changed and we are not given any indication of the type of person she was, making it difficult to create a clear psychological picture in our minds. Of course, that is not helped by her mental state. Her constant mentions of the way the man looks, how attractive he is, his mahogany hair (I almost stopped reading when I read about it for the umpteenth time), and also the way she always describes herself by contemplating herself in a mirror and never just talks (but mutters, scowls, groans, hisses…), and uses adjectives and adverbs randomly (and some wrongly) made it a hard read for me. (It made me think of much of the advice written about how to improve one’s writing that needs to be taken with a pinch of salt.) I appreciate the author’s note saying that she did the correcting herself and that this was the second edition, but it would benefit from some professional editing. (I have noticed that the book has now a new cover, so it might be that there is a more recent version that has corrected some of these issues).

Part 2 shows us (after a brief interlude in the present day) Sofia a year later when Henry has left her life and she has become a Bleeder. I won’t describe the entire plot in detail, but let’s say that Henry isn’t quite gone and she ends up near Doncaster and…

Part 3. We are back in the mental health institution and Sofia makes some interesting discoveries about the doctor she has been talking to that make her question her insanity.

If you follow my blog and my reviews, you’ll know that I am always intrigued by narrators, especially unreliable narrators, and due to her mental state, Sofia is very unreliable. I have mentioned my difficulties with the writing style (that might have been solved and I know some of the issues are personal, so, do check the book and see what you think). It is difficult to talk about the characters as everything is filtered through Sofia’s disturbed mind. I have already talked about her. Henry, well, due to her adoration it is difficult to get any clear sense of what he is like (a dark hero, I guess). I liked his friend William much better. He is politically incorrect and has a sense of humour, something that gives us a bit of breathing space from the emotionally charged story that dominates most of the book. Some aspects of the plot are intriguing, and the UK locations and the idea of folds in space where our world connects to ‘Hell’ I found interesting, but I felt that the book would be better appreciated by younger readers and those more interested in the romantic and paranormal aspects of the story.

From the point of view of the mental health issues, I think the book might be difficult to read for people who self-harm and who have lost somebody recently. Some of the descriptive writing is well achieved, especially when Sofia finds herself lost in the woods, and the first person writing makes us share in her confusion and fear. As a psychiatrist, I must clarify that some of the events described would never take place in a hospital, but this is a novel.

From reading the reviews I know that many readers love this novel and the series, so don’t let me put you off. I would advise you to check a sample of the book and to try it if you enjoy paranormal novels with a big dose of romance and you don’t mind first-person narrations. Ah, there is some sexual content, although not extremely explicit (and it does not take up much of the book).

Soho barmaid, Fia Taylor, unwittingly hires a hitman to kill the two murderers of her sister Melanie – only to find that Henry Blaire, the man she hired, is a centuries old incubus with a lust for human life and a mission to end anyone that knows his secret. Fia must run for her life. Will she survive? That is not the question…why does she end up in an insane asylum, muttering only his name? That is the more pressing matter… 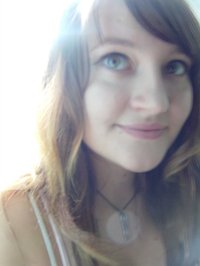 Michaela Haze lives in a small village outside London, with her two big white fluffy dogs. She is the author of the urban fantasy series, “Daemons of London”.