Cathy has been reading Made Safe by Francis Sparks 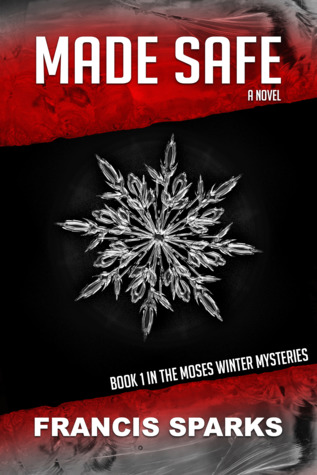 When Private Investigator Moses Winter was hired by Sharon Dunsmore to find out if her husband was having an affair, he got way more than he bargained for. What had seemed like a straightforward infidelity case turns into something much darker when Sharon and Moses confront Fred Dunsmore and his girlfriend, Šejla, a Bosnian refugee. Sharon has a gun, which happened to belong to Moses, Šejla has a knife and Fred ends up in hospital fighting for his life, while Moses winds up in jail. When Fred goes missing the case takes on a whole new slant.

DCI Raif Rakić is the officer in charge of the investigation, which becomes personal when he’s confronted with the knowledge Fred’s mistress is his cousin. He’s not above manipulating the evidence to protect Šejla from the law, while continuing to do his utmost to solve the case.

Moses is totally committed to his job, leading him to sometimes make unwise and dangerous decisions as he tries to unravel and follow information received. And as the case develops, Raif and Moses uncover something much more complicated and sinister than they anticipated. Raif thought he’d left all the bad stuff behind when he came to America but evil has tendrils everywhere. The characters, especially Raif and Moses, develop well as the story progresses and more is revealed. Moses is flawed, tenacious and sympathetic but I wasn’t sold on the romantic connection between him and Majka and didn’t think it added to the story.

Adding to the atmosphere, the book is set during a freezing winter in Des Moines, Iowa. Made Safe is a fast paced and gritty crime thriller, with several threads running through the narrative which tie up satisfactorily towards the end. Written in the third person from several viewpoints, with twists I didn’t see coming make this an enjoyable debut.

The subject matter makes compelling if horrifying reading. No matter how many times this topic comes up in storylines, it’s nevertheless appalling to realise it’s still relevant today.

For Private Investigator, Moses Winter, the job just got more complicated. His adultery case has taken a violent turn landing the subject of his investigation, Fred Dunsmore, in the hospital and Moses in jail. Moses is held for questioning along with his erratic client, Sharon Dunsmore, and Fred’s mistress, a Bosnian refugee who just happens to be related to the DCI agent investigating the case, Raif Rakić.

After Rakić secures their release, Fred goes missing, and Moses Winter finds himself compelled to find him. With the assistance of Rakic, Moses unravels Fred’s ties to Des Moines’s underworld and is forced to confront the most heinous crimes of his career.

Francis Sparks grew up on a farm in Iowa where he spent his days avoiding bulls and other livestock as he created castles in the pasture with odds and ends from the machine shed and his imagination.

In middle school, he fell in love with reading when he discovered TSR/Wizard of the Coast’s treasure trove of fantasy novels and he began to dream of one day becoming a writer. Working as a librarian’s assistant in college, he stumbled upon The Big Sleep by Raymond Chandler and quickly devoured all of his novels and Francis’s love of the mystery/detective story was born.

In his early thirties, Francis began chasing his dream of becoming an author and began writing seriously. That dream came true when his debut novel Made Safe was signed by Pandamoon Publishing in late 2015. Francis Sparks currently lives in Des Moines, Iowa with his amazing wife, Kelly. If he’s not working on his next novel or short story, you can find him teaching his children about dragons.