Barb has been reading The Standing Stones: Chronicles of Caymin (The Dragon Mage Saga III) by Caren J Werlinger. 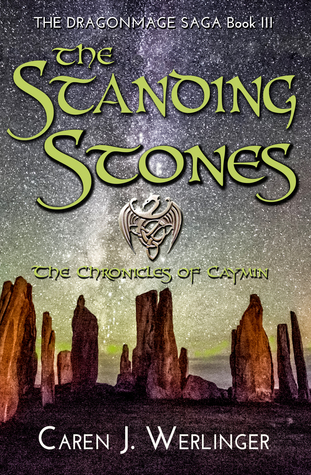 In my reviews of the the first and second book in this series, I mentioned early Ireland’s rich history of what we would today call magic and fantasy. But now that I live near circles of standing stones dating back thousands of years, while just up the hill from us is an ancient sign politely indicating the way to the Fairie Glen, the mystery and power of these sites is a tie to people and events going back before our records. From our modern viewpoint, we may find it hard to believe that so much of ancient society was informed by the belief that supernatural forces controlled and influenced almost every aspect of their lives. Only…what if that was exactly what was happening? What if there were people with special gifts, trained and honed over a lifetime to wield tools we can’t understand? What happens when that supernaturally-based belief system crashes against the equally supernaturally-based system propagated by Christian missionaries?

This is the third book in the series, and I have to be honest with readers. Like any epic, there are a LOT of characters, whose interactions and adventures in earlier books form the backbone to the story arc. But the good news for those new to the series, is that you have the chance to take in the entire series, without waiting for each new instalment like the rest of us.This conflict forms the basis for Caren J. Werlinger’s Dragonmage series. Set in an ancient Ireland steeped in magic traditions, it tells the story of a young girl who is the one chosen to fill ancient prophecies while her entire world is crashing against the rapidly spreading new Christian beliefs. In one sense, a story like this seems like rearranging deck chairs on the Titanic when we all know what is coming. But in another sense, it gives us a chance to imagine the lives of people to whom magic was a very real and present force. Author Caren Werlinger continues to balance delicately  between the magic lore taught and practiced by her fictional mages and the reality that we know it was the Christians who were eventually successful.

As a short (and hopefully not too spoilery) recap, the earlier books have already told the story of a child called Ash. Adopted by badgers (badgers!) as an infant after her village is destroyed by invaders, she survives because of her ability to communicate with animals. Although discovered and accepted as apprentice by mages, Ash and her new friends’ existence is threatened by the increasing influence of the Christianity introduced to Ireland by Saint Patrick in the fifth century.

Bonded with the baby dragon Péist, Ash receives her true name—Caymin—and discovers  her destiny as a dragonmage, one chosen to travel through a time Portal to save other mages and their dragons, prevent a horrific war, and keep the spreading Christians from destroying Ireland’s magic heritage.

The world building continues to be wonderful. Not only do we get the strong sense of the realities of everyday life, but we also see the lure of the “what if”. In Book III, for example, Caymin and Péist learn the true nature of the rings of Standing Stone that dot the British Isles. In telling their story, author Caren Werlinger takes many of the tropes of epic fantasy and converts them to the needs of her tale:

There are a few things that I might have changed. In keeping with the huge cast common to epic fantasy, this volume continues to introduce new characters whose main purpose seems to be tying up the fate of every orphan ever mentioned (and like all good epics, almost everyone IS an orphan). Also, Camin and Péist’s ultimate fate is still a bit unclear.

But all that pales against what I consider to be the finest achievement of these volumes. I admire the way Caymin’s character develops and grows, even as the slightly more alien dragon also tries to find his path as he matures. Caymin’s confusion about her attraction to another girl is sensitively and beautifully handled, fitting well into the context of the strong women who have guided her. And her acceptance of the heroic role she accepts owes more to those who have guided her than to any Prophecy, fighting prowess, or innate magical ability.

If you know a child entering adolescence, especially if they are questioning their sexuality, if they have any handicaps, or if they would like to see a hero who is NOT a Hollywood Ken-&-Barbie-R-Us clone, please do them a favor and send them this series. I wouldn’t hesitate to recommend it to anyone who enjoys YA fantasy, adventure, and coming of age stories.

Caymin and Péist, the young dragonmage and dragon who helped to end the last dragon war, have returned from that conflict longing only for peace. But peace is not to be found. Éire is on the brink of being torn asunder as Christians battle pagans, raiders from the north attack the coast, and their enemies—the power-hungry dragonmage and dragon they fought in the otherworld—have escaped from their prison.

Caymin and Péist are the only ones who can thwart them but, in order to do so, they’ll have to do the unthinkable—bring all of the dragons and their mages back to this realm. The dragons can only be summoned and controlled by one who holds the Méarógfola—the Bloodstone. The problem is, the Bloodstone hasn’t been seen since it was stolen a thousand winters ago.

In a race through time, Caymin and Péist will have to go back through the Portal, back a thousand winters, back to set in motion everything that must unfold as it was meant to. Finding the Méarógfola is only the beginning of their challenges. Old factions among the dragons make them as difficult to control as the human clans. Destroying the Bloodstone is the only way to end this once and for all, but there are those who will do anything, anything, to get their hands on it. 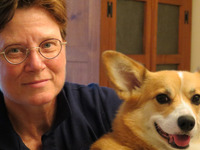 I was raised in Ohio, the oldest of four children. Much of my childhood was spent reading everything I could get my hands on, and writing my own variations on many of those stories where I could play the hero, rescuing the girl and winning her love. Then I grew up and went to college where I completed a degree in foreign languages and later another in physical therapy where for many years, my only writing was research-based, including a very dry therapeutic exercise textbook.

In the mid-nineties, I began writing creatively again and re-discovered how much fun it is. My first novel, Looking Through Windows, was published in 2008 and won a GCLS award for Debut Author. In 2012, I decided to begin publishing my own books under my imprint, Corgyn Publishing. Corgyn’s first release, Miserere, followed in late 2012 to excellent reviews.

I live in Virginia with my partner, Beth, and our canine fur-children