Cathy has been reading Dark Clouds Over Nuala by Harriet Steel 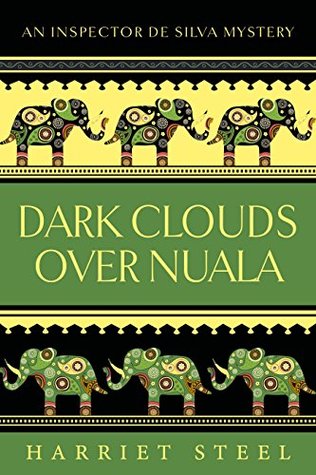 Inspector Shanti de Silva and his English wife, Jane, were attending Nuala’s very fashionable horse racing event, the Empire Cup, along with the assistant government agent, Archie Clutterbuck and his wife, Florence. William and Lady Caroline Petrie, were also in attendance with visiting family. The Wynne-Talbots, Ralph and Helen, were on their way from Australia, via Ceylon, to England to visit Ralph’s grandfather. Ralph is in line for the title of the 14th Earl of Axford and as his grandfather is not in the best of health, it seems he may inherit the title sooner rather than later.

At William Petrie’s request, Clutterbuck has organised a hunting party at Horton Plains, which included the Wynne-Talbots and several other people. When a death occurs at the most famous spot at Horton Plains, a precipice with a drop of thousands of feet, it’s generally assumed to be suicide. Shanti de Silva, with no head for heights, has to make a hair-raising trip up the mountain.

‘As the road snaked up through low, scrubby forest in a series of alarmingly tight hairpin bends, he averted his eyes from the sheer drop a few yards from the line of ambling ponies. Once, a monkey leapt from a nearby bush and, gibbering furiously, scampered across their path. De Silva’s pony shied and the reins slipped through his sweating palms. He quickly gathered them again and the animal settled but his heart beat faster for several minutes.’

Dark Clouds Over Nuala is set in the exotic and evocative era of genteel 1930s Ceylon and is the second book featuring the courteous and engaging Shanti de Silva, along with a cast of delightfully diverse and wonderfully developed characters. As with the first book in the series, Harriet Steel paints a vivid picture of the area, the food, culture, and societal undertones and attitudes of the time in the small community, giving the story a real sense of time and place.

Another very enjoyable, cosy mystery, faster paced than previously, and de Silva finds himself in rather more danger as well. Alongside the main plot are a couple of side stories involving Constable Nadar, a new father suffering from sleepless nights, and Sergeant Prasanna whose mother keeps trying to marry him off. The narrative is well written and plotted, and flows smoothly as the mystery unfolds. The relationship between Jane and Shanti is lovely and portrayed well with the differing cultures melding together.