Judith has been reading Skin Deep by Laura Wilkinson 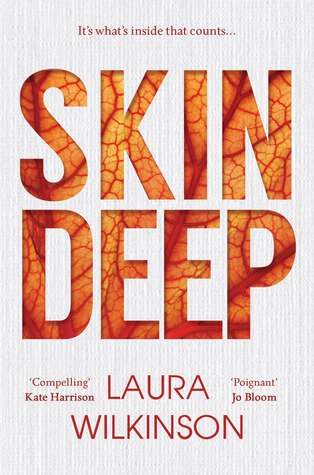 I have previously read Public Battles, Private Wars by Laura Wilkinson and admired her writing style,  so was looking forward to delving into her latest offering. I wasn’t disappointed, even though it is completely different  from what I expected.

In a way it’s a strange, almost uncomfortable tale, told in both present time and flashback. But it is one I came to understand; so many times we are judged by how we look and the author skilfully handles the characters; they come to life slowly but surely as the story progresses.

The dialogue is realistic and natural; the internal monologues of Cal as an adult are fascinating.

Some sections of the Northern setting in the 1980s were familiar for me  and gave a good sense of place. The descriptions of the darkest parts of the city and the living conditions of the characters were well written and gave an insight to the seedier side of Manchester at that time.

Less than a plot and more of a thoughtful unravelling of the interior lives of both the protagonist, Diana, and the other main character, Cal, Skin Deep is a book that left me pondering on the rights and wrongs of Diana’s actions on how her relationship with Cal. progresses.

Loved the ending by the way.

Art student and former model Diana has always been admired for her beauty, but what use are good looks when you want to shine for your talent? Insecure and desperate for inspiration, Diana needs a muse.

Facially disfigured four-year-old Cal lives a life largely hidden from the world. But he was born to be looked at and he needs love too. A chance encounter changes everything and Cal becomes Diana’s muse. But as Diana’s reputation develops and Cal grows up, their relationship implodes.

Both struggle to be accepted for what lies within.
Is it possible to find acceptance in a society where what’s on the outside counts for so much?

Laura Wilkinson grew up in a Welsh market town and now lives in Brighton with her husband and two boys. Her novels: Skin Deep, The Family Line, Public Battles, Private Wars and Redemption Song are published by award-winning Welsh press, Accent. What does all her work have in common? Compelling stories, fascinating characters, and ideas that make you think a little. At least she hopes so! As well as writing fiction, she works as an editor & mentor for literary consultancy, Cornerstones, and The Writing Coach.