Georgia has been reading Where There’s Smoke by Cathy Cole 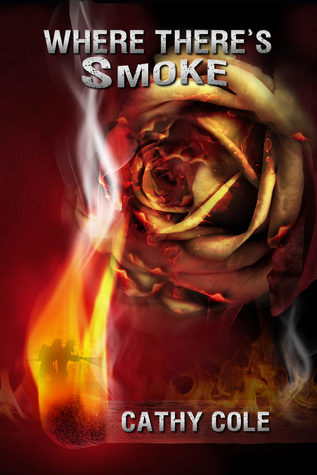 I received a copy of this novel as part of Rosie Amber’s Book Review Team and in exchange for my honest review, so here it is.

Where There’s Smoke is a story about Jo Woods, a firefighter who, after stirring up trouble for the authorities in her previous town, has been banished to the backwater of Mourne Lough. She is a survivor but the guilt she carries with her is more than just survivor guilt. When it becomes clear the killer has struck again, she starts making waves, much to the displeasure of her seniors, and the killer. Before long she is the target and the pressure is on to reveal the killer’s identity before he/she strikes again.

I do like reading a good mystery but I’m not usually someone who spends their time trying to work out who the baddie is. Generally, I’m quite happy being absorbed in the tale and enjoying the writing. However, I found myself trying to guess who the killer was in this read putting myself very much in Jo’s shoes. The author does a very good job of presenting various options for who might be behind the horrific killings and attacks that take place throughout this story and keeps up the suspense. I had my suspicions but they were only confirmed just as the reveal came.

We get to see the killer’s side of the story, as parts are told from his/her point of view, which is a bit creepy, particularly with his/her desire to ‘free the little birds’. There was no introduction to these parts though which threw me a little until I adjusted to who was speaking.

For a romantic suspense the emphasis was definitely on the suspense with only a light touch of romance introduced. I really liked Jo Woods and certainly hope that after everything she has been through she gets to enjoy more of the romance side in the future.

This book is based on firefighting and firefighters and there was just enough detail to make me confident in the author’s knowledge without there being an overload of technical fire stuff that could have made me switch off. Very well written, it was solid throughout, and a very well put together debut novel. Highly recommended.

I’ve given this novel 4.5 stars rounded up to 5 stars on Amazon.

Firefighter Jo Woods is struggling to hold onto her job and her sanity. Banished to the backwater town of Mourne Lough, she vows to stop making waves, admit her family’s death was an accident, and that the guilt she feels is plain old survivor guilt.
Then she finds the roses and everything changes.
The killer hasn’t stopped. He’s here. In the same town. Stalking her. And once again, no one believes her.
After seven years of avoiding family and friends, Jo is alone and friendless in a strange town. In order to survive and, more importantly, bring the killer to justice, she must overcome her fears and embrace her new life. And she must do it quickly, because the killer has his sights set on her and he’s willing to kill anyone who gets in his way.
Enter Ian “Coop” Cooper, who sets Jo’s pulse fluttering and her antenna into overdrive. Does she dare trust him?
One thing Jo is clear about: this killer destroyed her life once before. No way is she going to let him do it again–no matter what it takes.

Cathy Cole lives in Northern Ireland with her husband, two sons, and Dexter, a dog who thinks he’s her third son.
Cathy loves to write short stories and novels. Her first short won a national award and was broadcast on local radio. Her next took second place in the University of Winchester “Reaching Out” competition. You’ll also find her work in the 2009 and 2010 A Writers’ Christmas—anthologies published for charity. Her latest short story success was with Bridge House Publishing’s Crime After Crime anthology, released December 2012
Spurred by the success of her short stories, Cathy turned to writing novels. Her debut novel Where There’s Smoke—published by Fireborn Publishing—was inspired by the bravery of firefighters everywhere, but especially by those who gave so much on 9-11. Cathy has drawn directly upon her family’s experience in the fire brigade in order to bring realism to her story.
At the moment, Cathy is hard at work on her next novel The Hungry Ghost.