Judith has been reading The Mistress Of Blackstairs by Catherine Curzon 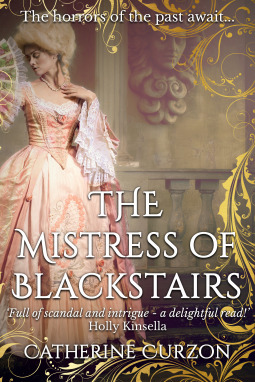 Although the story has a slow start for me, I thoroughly  enjoyed this book once I  persevered. Catherine Curzon has obviously researched the era well and I do like her style of writing.

The characters come alive on the page with the excellent, drip-fed descriptions of their appearances. Even minor characters are well rounded and easily envisaged. I especially liked the many layered portrayal of the protagonist, Georgina Radcliffe aka Madam Moineau whose back story is revealed in a steady and interesting style throughout. And her foster daughter, Molly, shown to be a child of the streets, behaves just as I would expect; living where and how she exists. Interestingly she is portrayed with a mixture of pathos and humour. Anthony Lake; an empathetic and charming character, even though shown to be a  bit of a rogue, I liked as soon as he put on an appearance. As for the  Viscount Polmear…instantly dis-likeable, as all good antagonists should be.

A lot of the story is carried on dialogue which is strong and it is easy to follow who is speaking even without dialogue tags.

Although it is a time- honoured and steadily paced plot (most of the time) of ‘ boy meets girl’ and initially disliking each other, the story is so multi-faceted and played out in such an intriguing way that I read it in one sitting.

I so wanted to give The Mistress of Blackstairs  five stars but there were a couple of disappointments for me.  I love novels that give me a sense of place through descriptions using all five senses and although the interior settings were brilliant I got little sense of the streets, of the places in London at the at time (except for the lovely descriptions of the fires on the corners of the streets), that the characters move around in.

And, although the lead up to the ending is exciting, the actual denouement feels too rushed and, I’m afraid, a little predictable, although I accept it would be disappointing (for me anyway) if it hadn’t factually ended as it did.

All in all though, an excellent read and one I have no hesitation in recommending to readers who enjoy historical fiction.