Noelle has been reading This Parody Of Death by William Savage

This is the third book in the Ashmole Foxe series, about a Georgian dandy, bookseller, and occasional unofficial investigator. I reviewed both of the previous books and like this character. Of the three, this book is my favorite.

Ashmole Foxe, a man about town and known for his foppish ways, moves easily through Georgian Norwich because of his ownership of a popular bookstore. He has also developed something of a nose for investigation. When a miserly, curmudgeonly undertaker and bell ringer is found with his throat cut, Foxe is sought out by the local grocer, Foxe’s friend Captain Brock, and Alderman Halloran to find the killer. There are more tracks to follow in the investigation than a dog has fleas: a group committed to a secret heresy, a son who betrayed his father, a house with deep and deadly secrets, a woman determined to protect the great passion of her life, a daughter scorned, and a group of bell ringers with axes to grind. Foxe has to unwind a web of lies, false leads, and decades-old deceits to find the killer.

There were no giveaway hints in this book, and I was kept guessing almost to the end. The characters are wonderfully individual, from the urchin whom Foxe befriended, with his own army of street minions, the widow who runs his store, to the seafaring Captain Brock, who may soon be landlocked by a woman. The Georgian world created by the author is authentic to minuscule details, and the reader is immediately immersed in its colorful activity. What I liked most about This Parody of Death was the growth of Foxe. He engages in serious self-examination about the nature of his life, his over-the-top fashion, and possible goals for the future. This character is truly three dimensional and real.

There are a few drawbacks I have noted before: some repetition, over-long discussions between characters and Foxe’s lengthy considerations. However, these are minor compared to the enjoyment of this read. Who knew I would learn about the mathematical patterns of the change-ringing of church bells?

I recommend this book as a great read, as are all of William Savage’s books. 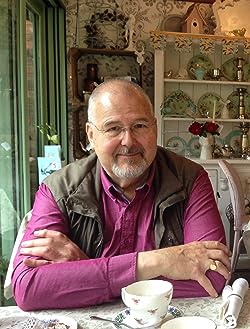 William Savage grew up in Hereford, on the border with Wales and too his degree at Cambridge. After a career in various managerial and executive roles, he retired to Norfolk, where he volunteers at a National Trust property. His life-long interest has been history, which led to research and writing about the eighteenth century.  But his is not just a superficial interest in history, but a real desire to understand and transmit the daily experience of living in turbulent times.