Terry has been reading Spirit Of Lost Angels by Liza Perrat 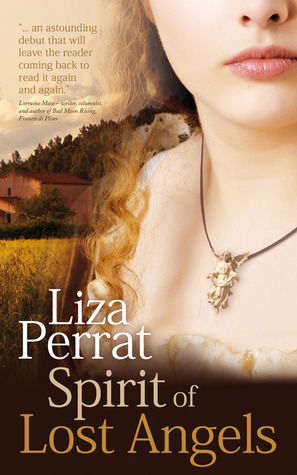 Spirit of Lost Angels is Liza Perrat’s debut novel, and revolves around Victoire Charpentier, a peasant living in the village of Lucie-sur-Vionne.  It is linked to the later book, Blood Rose Angel, by the bone angel talisman passed down through generations.  This first novel in the trilogy takes place in the years leading up to the French Revolution.

Victoire’s life is one of tragic events indeed, as she loses those she loves to accident, illness, the danger and politics of the times, and at the careless hands of the nobility.  Cast into a brutal Parisian prison, she meets the notorious Jeanne de Valois-Saint-Remy who inspires within her the fire of revolution; I liked the inclusion of a real-life character in this work of fiction.  All the way through the book I appreciated the amount of research that has gone into writing this novel ~ such an entertaining way to fill in the gaps in my education.  I enjoyed reading about the lives of the rural peasants in the beginning of the book, and comparing this with the medieval life in Lucie, four hundred years earlier, in Blood Rose Angel.

Throughout the book, the gaping chasm between the lives of the poor and those of the ludicrously self-indulgent aristocracy is always evident; it was most interesting to read the thoughts of the time about the general lot of women, and, as in the medieval story, the restrictions due to social mores and religious belief/superstition.  Victoire lives many lives in her short one, and I was pleased to see return to Lucie, and reunite with the family she had longed for, for so many years, and to see wrongs overturned.

Showing the history of a country via the changes in one village over a period of six hundred years is such a great idea, and I now look forward to reading the third book in the trilogy, Wolfsangel, which is set during World War Two.

Her mother executed for witchcraft, her father dead at the hand of a noble, Victoire Charpentier vows to rise above her poor peasant roots.

Forced to leave her village of Lucie-sur-Vionne for domestic work in Paris, Victoire suffers gruesome abuse under the ancien régime. Can she muster the bravery and skill to join the revolutionary force gripping France, and overthrow the corrupt, diabolical aristocracy?

Spirit of Lost Angels traces the journey of a bone angel talisman passed down through generations. The women of L’Auberge des Anges face tragedy and betrayal in a world where their gift can be their curse.

Amidst the tumult of revolutionary France, this is a story of courage, hope and love.