Noelle has been reading Scarborough Fair by Margarita Morris 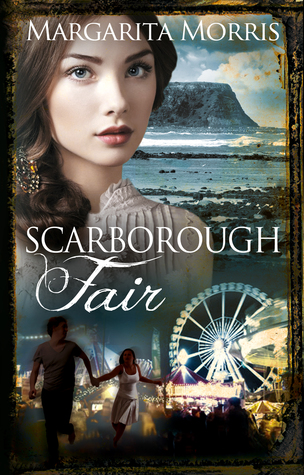 I love time shift fiction and am quite content to read a book classified as YA – there is a basic simplicity to these books that appeals to me. I think Scarborough Fair will appeal to adults, too. This is a smashing historical mystery, alternating with a modern day detective story with young sleuths.

In 1899, Alice comes with her personal maid Mary to the seaside tourist town of Scarborough to find freedom and relaxation. She is escaping for short time from her older, demanding and overbearing fiancé, Henry Blackwood, who has been forced on her by her family because of he is an aristocrat. Alice does not love him and does not want to marry him, but she has a large inheritance that Henry wants and needs. While in Scarborough, Alice meets a young painter and they fall in love. Henry will do anything to own Alice, including sending a man to follow her and report back to him. The prologue of the book recounts the hospitalization of Alice by Henry in a horror of an insane asylum, to keep her isolated until she is old enough for them to marry.

In 2016, Rose comes to Scarborough to spend the summer with her mother and grandmother. She is not happy to be there, since all of her friends are spending their summers in exotic locations and her boyfriend has apparently dropped her. Then she meets Dan, who comes to apologize to her when his father, driving his red Ferrari too fast, nearly runs her over. She and Dan hit if off right away and make a date to go to the Scarborough Fair together. Dan’s father is mixed up with a drug dealer to make money to keep his failing arcade business going, and Dan comes face to face with two menacing men looking for his father. Dan is determined to find out who they are and drags Rose along as he follows them.

The author does a fantastic job linking these two stories, with lots of tension and well-drawn, interesting characters. Even the two thugs looking for Dan’s father are carefully and distinctively limned. There is enough description for the reader to feel at home in Scarborough in both eras, and the relationship between Rose and her grandmother tugs at the heart. The huge building, once a manor house that was an insane asylum, looms menacingly as a character in itself in both story lines.

The only real drawback I noted was the jumping back and forth between eras in the same chapter, without warning; I would have preferred these two story lines to be separate chapters. And Dan’s apparently willingness to drag Rose into danger with him, leaving her behind when they are being chased, seemed a little forced, especially since he didn’t know her all that well.

Those considerations aside, this book is a page-turner and I read it straight through. I highly recommend it and have a few YAs in my family who will get a copy. There is a sequel to this book in the works, and I plan to grab it.

1899: Seeking sanctuary in the seaside resort of Scarborough, Alice discovers she is not safe from her fiancé’s jealous clutches. She jumps at the chance to run away with a man she truly loves, but when a plot to help Alice escape goes dreadfully wrong, she finds herself in terrible danger.2016: Forced to spend the summer in Scarborough with her mother and grandmother, Rose doesn’t think her holiday is going to be much fun. Especially when she’s almost killed by a Ferrari driver on the first day. Things start to look up when she meets Dan and he asks her to go to the fair with him. But Dan’s father is mixed up with a criminal gang and Rose and Dan find themselves drawn into a life and death situation.For both Alice and Rose, the fun of Scarborough Fair soon turns into the nightmare of a Victorian lunatic asylum. They must both escape if they are going to survive.

Margarita Morris was born in Harrogate, North Yorkshire, in 1968. She studied Modern Languages at Jesus College, Oxford and worked in computing for eleven years before leaving to work with her husband on their internet business. Ms. Morris particularly likes writing novels set in historically interesting places, and she has published three other novels, Scarborough Ball and The Sleeping Angel, both time slip stories, and Oranges for Christmas, set in Berlin in 1961. When she is not writing, she enjoys singing in an Oxford chamber choir and gardening. She lives in Oxfordshire with her husband and two sons.