Today’s team review is from Barb, she blogs here, http://barbtaub.com/

Barb has been reading The Curse Of Arundel Hall by J. New 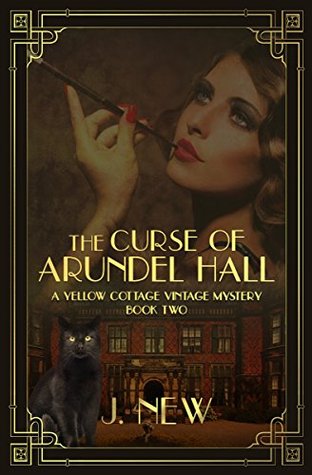 Again, J. New doesn’t disappoint. In true homage to the genre, in The Curse of Arundel Hall all the suspects are gathered together in the drawing room while the detective lists each one’s opportunity and motive for murder. The victim, American social climbing actress Patty Mae, had revealed herself guilty of every sort of character fault, including that most unforgivable of all—bad manners. Although the author withheld a vital clue that solved the crime until that final summation, I have to admit that the identity of the murderer would have been just as complete a surprise to me at either point.

Wikipedia defines a cozy mystery as “…a subgenre of crime fiction in which sex and violence are downplayed or treated humorously, and the crime and detection take place in a small, socially intimate community.” True to the definition, sex, profanity, and violence are “behind the door” and only gently referenced. Sleuth Bella is an amateur who gathers a posse of essential helpers—in this case the Police Commissioner, his chief medical examiner, and her own well-connected family.

I did have a couple of places where the required “willing suspension of disbelief” was more of a stretch. And the writer’s device of ending each chapter with somewhat heavy-handed foreshadowing—”Little did I know it would be sooner than I expected.”—got old quickly. But the thing that raises this series to five stars for me and makes me anxious for to read the next book, is the genre mix of paranormal with cozy mystery.

Bella sees ghosts, and even talks to them. Her cat, Phantom, is usually a ghost. Except (he’s a cat after all) when he’s not. Mixing the paranormal elements with the main mystery, and adding dessert toppings of secondary mysteries/ghosts keeps the story lively and makes the reader look forward to learning more about the characters (both living and dead).

As a cozy mystery, as a paranormal detective story, and as a completely entertaining series in a historical setting, I am delighted to recommend The Yellow Cottage Mystery series.