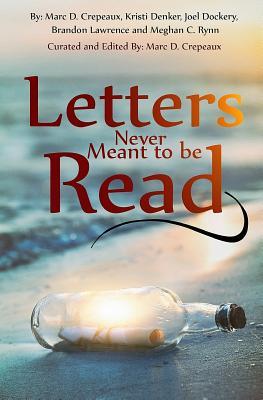 Letters Never Meant To Be Read by Marc De Crepeaux

Isn’t the cover gorgeous?  This is a collection (by a group of writers) of those letters you’d love to write, to get off your chest what you really want to say to people like the friend you’ve fallen out with, your ex-husband, ex-employer, the descendent you’ll never meet, etc.  A clever and unusual idea, I thought.

As is always in compilations, the quality of these little pieces vary, though they are all well presented.  Generally, I liked the contributions by Meghan best; they were more acerbic, witty ~ and more concise, which I think works better for this.  Others reminded me more of blog posts, or essays, with far more background and explanation than might be found in a real letter to someone.  My absolute favourite, though, was ‘Dear Mother Prostitute’ by Marc, which was excellent.  I could tell which ones Brandon had written from the title and first line; I guessed each one, after reading his first two, and was never wrong.  They seemed brooding, introspective; the styles of the writers was much in evidence.  Interestingly, the last letter is from older Marc to his younger self; I liked that, and it made me want to write my own.

I don’t know if they were written as catharsis for the writers, but I would guess so.  I am sure they worked very well for this (I bet most of us have written that email or letter in such a vein, that we’ve never sent!).  As such, they were perhaps less entertaining than they might have been, had they been written more with the reader in mind, and now and again I felt a bit of professional editing might have served the book well, but the honesty and emotion certainly shone through in each one.   A thought-provoking exercise, and there’s a good bit at the back showing a photo and a small bio of each writer, which meant so much more after having looked inside their minds.  For the record, only Marc looked anything like I imagined him.

Book Description
Sometimes angry, occasionally sad and often with humorous quotes, the authors of Letters Never Meant to be Read share their views on life with the power of the written word. In the today’s world of 3 second text messaging, emojis and Facebook, most people don’t know how to write a letter that connects with others. Imagine the effect that you could have on the object of your unrequited love, if you could express yourself through letter writing!Letters Never Meant to be Read contains a compelling series of writings which have been created by five accomplished authors. Immerse yourself in these amazing letters and allow your full range of emotions to be experienced as you rediscover the power of the written word in letter form.
Goodreads | AmazonUK | AmazonUS | Twitter