Olga has been reading Warnings Unheeded by Andy Brown 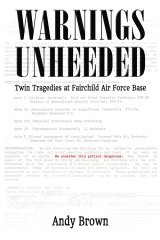 Thanks to the author for providing me with a free copy of his book that I review as part of Rosie’s Books Review Team.

I am a psychiatrist and have worked in forensic psychiatry (looking after patients with a history of dangerous behaviour and, on occasions, criminal records) and therefore when I was approached by this writer about the book, my interest was twofold. Although I’m not currently working as a psychiatrist, I wanted to read the book to see what lessons there were to be learned, especially from the incident of mass shooting, as it was particularly relevant to the issues of mental health assessment and treatment. I was also interested, as a reader, a writer and a member of the public, in how the author would write about the incidents in a manner that would engage the readership. More than anything, I was interested in reading about his personal experience.

As a reader (not that I’m sure I can take my psychiatrist hat off that easily), the book intertwines both incidents, that coincided in the same setting, Fairchild Air Force Base, within a week period. We are given information about previous concerns about the flying acrobatics of Holland, whose antics had worried a number of people at the time, although in his case we don’t get to know much about the person (the information is more about those who reported concerns and the way those were ignored or minimised), and, in much more detail, about the past history and behaviours of Mellberg, that read as a catalogue of unheeded warnings and missed opportunities.

Concerns about Mellberg follow him from school, where he was a loner, suffered bullying, never made friends and showed some odd behaviour and continue when he joins the Air Force. He becomes paranoid, starts harassing his roommate and despite concerns and assessments, he is simply moved from one place to the next, and the mental health assessments are either intentionally ignored or missed. Later on, when somebody decides to take action, there is no evidence of follow-up or organised system to check what happens when somebody is discharged for mental health reasons (some changes ensue, thanks mostly to the efforts of Sue Brigham [the wife of Dr Brigham, one of Mellberg’s victims], after the fact) and readers can feel how the tension builds up to the point where it’s only a matter of time until a serious incident happens.

Brown, the author, shares his background and his career progression to that point, his interest in policing and security from a young age, and he happens to coincide in time and space with Mellberg, being the first to respond to the calls for assistance when Mellberg starts shooting, first the people he blames for his discharge from the air force, and later, anybody who crosses his path. Although we know what’s going to happen, and, in a way, Brown has always been preparing for something like this, the reality is no less shocking.

Brown’s description of events, what the victims did, and what he did is exemplary, and it shows his experience in crime scene investigation. We can clearly reconstruct what happened minute by minute (almost second by second). As the description is interspersed with witness statements and personal detail I didn’t find it excessive, although that might depend on what readers are used to (I know from personal experience of writing reports that accuracy and details are prime, but that’s not what readers of fiction are used to, for example). The book also includes photographs of the scenes of both incidents, diagrams of the sites, etc.

As I said above, although the reader gets the same sense of impending doom when reading about the dangerous and reckless flight manoeuvres Holland does, we don’t get to know much about Holland as a man, only about his experience flying. The issue of warnings not being acted upon is highlighted, but we don’t know if anything else might have been behind Holland’s behaviour, and we’re therefore less personally invested in the case. I must also confess to having little understanding of acrobatics and individual planes capabilities, so I found some of the details about that incident more difficult to follow and perhaps unnecessary for the general reader (the message is clear even if we don’t know exactly how the gs a fuselage can bear might be determined).

Brown’s own reaction to the shooting and his difficulties getting his PTSD acknowledged and treated form the latter part of the book, and they come to illustrate a side of these tragedies that is hardly ever commented upon or discussed in detail, as if sweeping things under a carpet and not talking about them would make them disappear. (As he notes, people don’t know how to react: they either joke about the incident or avoid talking about it completely). He honestly shares his struggle, how long it took him to understand what was happening to him, the less than helpful behaviours he engaged in, and his self-doubt and guilt feelings, not helped by the reluctance of the Air Force to share the information he requests. He had the added difficulty of being removed from service every time he tried to get help, something that he, understandingly, saw as a punishment. He eventually decided to leave active service to try and find peace of mind, but it was a lengthy and difficult process, that might vary from individual to individual. It is always helpful, though, to know that one is not alone and it is not just a matter of getting over it, and that’s why personal accounts are so important.

Brown offers conclusions and lessons on how to keep safe. Although I don’t necessarily agree with some of the comments (the right to bear arms and use them for self-defense is a very controversial subject and I currently live in a country where not even the police carry them regularly), I agree with the importance of being aware of the risks, with the need to be more sensitive to the mental health needs of the population, with the importance of providing follow-up and support to those who experience mental disorders and also the need to see human beings in a holistic way, rather than only treating their bodies and ignoring their minds.

This is an important book that should be read by people who work in law enforcement (either in the military or in a civil environment), provide security to organisations, and of course by psychologist and psychiatrists alike. It is not a book to read for entertainment, and it is definitely not a light read, but I would also recommend it to people who research the subject and/or are interested in real crime and PTSD. I wonder if a shorter version of the book, dealing specifically with the PTSD experience of the author might be useful to other survivors of trauma who might find the rest of the book too difficult to read.

From a professional point of view, I was struck by the similarities between the double-bind and the difficult situation psychologist and psychiatrists in the military find themselves in and that of forensic psychiatrists and psychologists in civil life (as we also have to look after patients and try to establish a therapeutic relationship with them, whilst at the same time having to report to the courts and Home Office or government the risk the patients might pose to specific individuals or to the population at large). It is a delicate balancing act because, ultimately, psychiatry (and psychology) is subjective, and as demonstrated in Mellberg’s case, not everybody will agree on diagnosis or risk assessments. But when the evidence mounts, there is no excuse. And, eventually, we need to listen to our own intuition and gut feeling at times.

The true story of two separate mass-casualty incidents that occurred within days of each other at a US Air Force base. Using the words of the people who experienced the tragedies, the book provides in-depth look at the before, during and after of a preventable “active shooter” incident and an avoidable fatal plane crash.

In one tragic week at Fairchild Air Force Base, an “active shooter” terrorized the base hospital and a talented but reckless pilot crashed a B-52 bomber near the flight line. Both fatal tragedies had been repeatedly predicted by numerous airmen and mental health professionals.
In “vivid and thoroughly researched detail” Warnings Unheeded delivers an unprecedented, in-depth look at the events that led to the twin tragedies. The book follows an “active shooter” as he progresses toward his crime and dispels the myth that these incidents are random acts of violence committed without warning by otherwise normal individuals.
In a parallel account, Warnings Unheeded tells the story of a veteran pilot who was known for exceeding the maneuvering limits of his B-52 bomber. His reckless flying not only put the lives of his crew at risk, but also the lives of the air show spectators who gathered to watch him perform. When attempts to ground the pilot were unsuccessful, several aviators refused to fly with him and “predicted the worst air show disaster in history.” 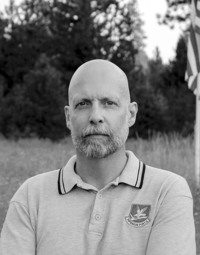 Andy Brown is an Air Force law enforcement veteran from Port Orchard, Washington. After serving in Idaho, Greece, Washington, Hawaii and New Mexico, he returned to the Spokane, Washington area where he works for the Department of Homeland Security. He spent seven years researching and writing Warnings Unheeded. The book is part of his ongoing effort to share the lessons learned from the fatal tragedies at Fairchild Air Force Base, the heroic actions of others and his experience with the effects of trauma.