Terry has been reading Henry by Tony Riches 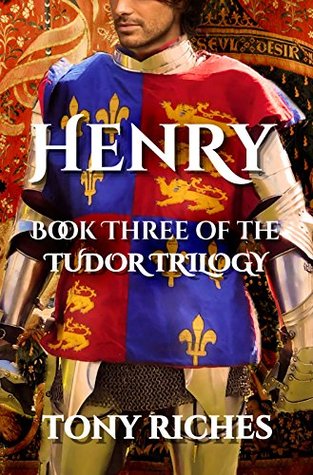 I reviewed this as a member of Rosie Amber’s Review Team, via an ARC, but I’m a big fan of this author so I would have bought it anyway. I adored the second part of the Tudor Trilogy, Jasper, and was looking forward to this last part.

I love Plantagenet and Tudor history, but Henry VII is one of the characters I knew less about; I’ve always thought of him, I suppose, as a not very interesting link between the wars of York and Lancaster, and the great era of the eighth Henry and Good Queen Bess.  This book showed, though, that the uniting of the two houses to end the Wars of the Roses, after Henry defeated Richard III at Bosworth and married Elizabeth of York, was far from the end of the story.  He then had to deal with kingship itself, something that his mother, Margaret Beaufort, had always assured him was his right, though he was not one who sailed gallantly into such a role.  His reign was beset by troubles with the Yorkist rebels, imposters like Perkin Warbeck, the Cornish rebellion, financial difficulties, and tragedy within his own family, with the deaths of children Edmund and Katherine and, of course, Prince Arthur ~ which gave way to the reign of the most famous of all English kings, Henry VIII.

I liked how Tony Riches has shown us the man behind the sombre portrait, and I warmed to his Henry Tudor very much.  Even though some of his problems were of his own making, he seemed like an honest, self-aware, realistic person, rather humble, and very much like his mother ~ the ‘Beaufort Steel’ is much in evidence, though to my mind it skipped a generation, and didn’t come out again until Henry’s granddaughter, Elizabeth, was on the throne.  Riches writes so well, and I read this book in almost one sitting.  So interesting, of course, to read about the young Henry VIII, and I had forgotten the difficulties that came with his desire to marry Catherine of Aragon, his brother’s widow.  I couldn’t help thinking that, given the events some twenty-odd years later, it might have not been meant to be.

Henry’s story is not as thrilling as Jasper’s, but this is a fine end to a superbly researched and well-written trilogy, one I would recommend to anyone with an interest in this period of history.  And don’t forget to read the Author’s Note!