Terry has been reading The Silent Kookaburra by Liza Perrat 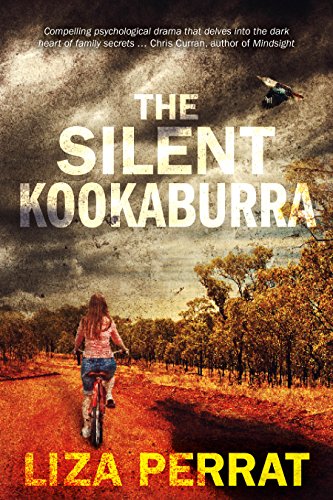 THE SILENT KOOKABURRA by Liza Perrat

Every so often I find a real gem in the review team submission list, and this was one of them.  I thoroughly enjoyed it; Liza Perrat is an excellent writer.

The story takes place in the early 1970s in a quiet town in New South Wales called Wollongong, and is narrated by eleven year old Tanya, who lives with her alcoholic but not unlikable father, Dobson, her disturbed mother, Eleanor, who has miscarried many children, and her grandmother, Nanna Purvis.  It’s sad, tragic and funny, all at the same time.  Behind the story of everyday life lurks the shadow of child abuse, madness and murder, but these are dealt with so cleverly that the book doesn’t seem particularly dark.  If you can imagine that.

Eleanor finally manages to carry a child to term and Tanya is sure their family life will improve, but events take several turns for the worse, and she has to deal with great uncertainty about her future.  I wouldn’t have thought I’d like a whole novel written from the point of view of such a young girl, but one reads so much between the lines as Tanya reveals more to the reader than she understands herself.  Danger and intrigue is added by the appearance of the mysterious, seedy Uncle Blackie, the various nosy neighbours, the girls who tease Tanya for being fat, and her Italian friend Angela’s are-they-drug-dealers-or-aren’t-they family.

On the verge of adolescence, Tanya veers between excitement about becoming a woman, and comfort eating her way through her disintegrating family life.  One question remains in her mind, and is still there at the end of the book, an epilogue that takes place forty years later.

The characterisation in this book is brilliant.  Nanna Purvis is hilarious, a real old Aussie matriarch, and the atmosphere of the family’s slightly backward way of life of 45 years ago is so well portrayed.  I notice from the Author’s Note that Liza Perrat lived in Wollongong, and there are many popular culture references to the time, including items of food that Ms Perrat must have eaten back then, but, unlike other books in which this occurs, I didn’t find it contrived, or as if it was a deliberate strategy to press nostalgia buttons.  It worked (I particularly liked Nanny Purvis and her Iced VoVos).

All eleven-year-old Tanya Randall wants is a happy family. But Mum does nothing besides housework, Dad’s always down the pub and Nanna Purvis moans at everyone except her dog. Then Shelley arrives –– the miracle baby who fuses the Randall family in love for their little gumnut blossom.

Tanya’s life gets even better when she meets an uncle she didn’t know she had. He tells her she’s beautiful and could be a model. Her family refuses to talk about him. But that’s okay, it’s their little secret.

Embracing the social changes of 1970s Australia, against a backdrop of native fauna and flora, The Silent Kookaburra is a haunting exploration of the blessings, curses and tyranny of memory.

Unsettling psychological suspense blending the intensity of Wally Lamb with the atmosphere of Peter James, this story will get under your skin.

Liza grew up in Wollongong, Australia, where she worked as a general nurse and midwife for fifteen years.
When she met her French husband on a Bangkok bus, she moved to France, where she has been living with her husband and three children for twenty years. She works part-time as a French-English medical translator, and as a novelist.
Several of her short stories have won awards, notably the Writers Bureau annual competition of 2004 and her stories have been published widely in anthologies and small press magazines. Her articles on French culture and tradition have been published in international magazines such as France Magazine and France Today.

The Silent Kookaburra, a dark psychological suspense novel set in 1970s Australia, was published in November, 2016.

Friends, Family and Other Strangers From Downunder is a collection of 14 humorous, horrific and entertaining short stories set in Australia, for readers everywhere.

Liza is a co-founder and member of Triskele Books, an independent writers’ collective with a commitment to quality and a strong sense of place, and also reviews books for Bookmuse.