Noelle has been reading Echoes of Time by Anne Allen 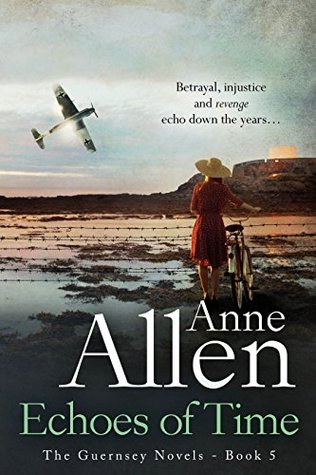 I fell in love with books about the Guernsey Isles when I read The Guernsey Literary and Potato Peel Pie Society by Annie Barrows. Until then I had known nothing of the Channel Islands and what their inhabitants had endured during WWII. This book returned me there and had the added attraction of being a time slip novel, alternating between the present time and the time during that war.

In 1940, Olive Falla, a fairly independent young woman, who works as a farmhand on her father’s far, married Bill Falla. Falla owns his own farm, and Olive thinks this is the best future for her. She soon discovers she’s made a horrible mistake – Falla is a harsh, unloving, and demanding husband, who sees his wife as a slave to work the farm, take care of him, and give him children. Soon he finds any excuse to beat her. By chance, when collecting sticks for scarce firewood on an estate taken over by the German occupation, Olive meets Major Wolfgang Brecht, a veterinarian. She falls in love with the gentle and caring Wolfgang, who makes excuses to visit the farm to inspect the cows.

Flash forward to 2010, when Natalie Ogier returns to her homeland of Guernsey to escape her stalker, a man with whom she had a relationship but who turned abusive. She buys a beautiful cottage, built on the site of a secluded and burned out farmhouse. Her immediate neighbor is Stuart, the grandson of the original owners, Olive and Bill. His mother, their child, has lived off the island since she was old enough to be on her own, leaving her mother and her life there behind.  Stuart knows nothing of his grandparents because his mother is silent on her past.  When strange and eerie things begin to happen in the cottage, accompanied by a threatening voice, Natalie initially tries to tough it out on her own. Eventually she confides in Stuart and her parents.

Natalie wonders whose spirit is inhabiting her cottage, and after meeting Stuart’s mother, she becomes convinced that it has something to do with his grandparents. What happened to Olive, Bill and Wolfgang? What spirit inhabits Natalie’s cottage? Is it malevolent and how can it be banished? What links Stuart and his mother to that place? You’ll have to read the book to find out!

I thoroughly enjoyed this story. It has several compelling threads and the jumps back and forth in time left me hanging and wanting to read on. The only problem was the prolonged diversion to France, where Natalie is invited to attend Stuart’s mother’s marriage to a gentle and understanding man. It went on far too long, and added virtually nothing to the progress of the story, so I skipped through it. I think it could have been omitted or vastly shortened.

Other than that, the author has created believable characters, lovely descriptions of Guernsey, and lots of tension, along with a healthy dose of history.  It is clear why she is a popular author. Well worth the read!