Hampstead Fever by Carol Cooper
My rating: 3 of 5 stars

Hampstead Fever comes under the genre of contemporary literary fiction. The book is set in London and is the sequel to One Night at the Jacaranda, where a group of people met at a speed dating event. In Hampstead Fever the reader can meet some of these characters again.

Dan and Laure are a couple with an eleven month old child. Dan, an ex-prisoner, is a chef. He’s dissatisfied with the lack of sex on offer in his relationship. He’d also like to improve his vocabulary, so every day he tries a new word. This didn’t work as a defining characteristic for me I didn’t know the meaning of most of them and I didn’t want the distraction of breaking from the storyline to look them up; I felt it was a bit contrived.

Laure, a former international lawyer, is a stay-at-home mum. Like many mothers, Laure suffers anxiety over the welfare of her young son. I thought Laure’s fears were well-written, showing the author’s vast knowledge of medicine from her own background as a doctor.

Geoff is a frustrated doctor, under pressure from his workload. He’s in a relationship with Daisy, an actress who compartmentalises her life and keeps Geoff in the dark. He also has a son who lives with his mother in Australia. To begin with I thought Geoff must be an older man as he relied on pills to help him perform sexually, but it turned out he was much younger. His relationship with his son began as strained, reflecting modern family problems. Sadly, when they reunited, I felt there was too much fact and not enough emotion and depth to the characters.

Karen is a single parent, frustrated with life and going through the menopause. She has a casual relationship with a “footie Dad” (taking place in the changing room after the weekly match). This is all the emotional entanglement she needs after four children and a broken relationship (she thinks…).

Harriet and Sanjay have been in a living-separately relationship for two years, but things are about to change. After a long illness Sanjay wants more from life. Harriet is a struggling freelance journalist and wannabe author.

The medical background of this author is very clear and comes across throughout the book; there is also a sense of noir humour, especially when Geoff takes surgery. I was not sure that some of the comedic incidents translated well into general fiction, being a bit too medically specialised.

The book contains much profanity and discussion about sex, so it may not appeal to those who like a ‘cosy’ or ‘clean read’ contemporary drama. The chapters alternate between the different people in short passages which, I found, made it hard to connect with them before we moved on again.

The storylines were filled with negative thoughts and responses from the characters, and, alas, I felt the author was trying a bit too hard with the dry humour; comedy can be very hard to get right. There’s also a tendency towards ‘telling’ rather than ‘showing’, throughout. For those who prefer a happy ending to their books there is a celebration at the end, but I wasn’t sure that it was consistent with the mood of the rest of the book, and aspects of it were confusing.

Who do I think would enjoy this book? Definitely those with a medical background, who will be able to relate to many of the incidents and patients portrayed, and those who have interest in the psychology of behaviour. For me, though, it was just an “okay” read.

The intertwined lives and loves of six North Londoners get complicated as emotions rise one hot summer. They’re all approaching 40, but they don’t act it. The mother panics about her child, the journalist struggles to pay her bills, the new chef cooks up trouble, and even the sensible doctor loses his head when the mercury soars. 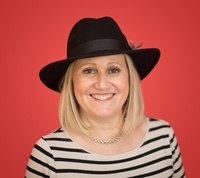 I’ve been writing as long as I can remember, but nobody paid me for it till I got columns in the likes of The Sun newspaper. In my other life I’m a doctor in London & the author of a string of health books. My novel ONE NIGHT AT THE JACARANDA is a contemporary tale about dating, with a heart-rending medical dilemma. My second novel HAMPSTEAD FEVER, published July 2016, tells the story of six intertwined lives one hot summer as emotions reach boiling point.