Cathy has been reading The Replacement Chronicles by Harper Swan 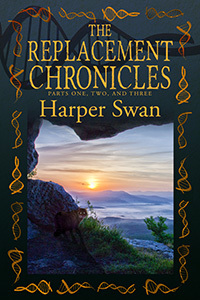 Mark Heyek from the Parkinson’s Institute is a research scientist working in the field of genetics. Having sent a saliva sample to Genetics and Me, Inc. for further research into Parkinson’s disease, and as lead collaborator, he is invited to attend a meeting. What follows is an amazing fictional, although based on scientific knowledge, look back at the genetics that make up modern man.

The story then transports us back thousands of years and introduces Raven, a healer whose mate died, and because she’s on her own and childless, has been banished from her tribe. Raven’s sister, Willow, has persuaded her mate, Bear, to allow Raven to join their own tribe. As Bear is bringing Raven home they happen upon a group of trespassing Neanderthals hunting Bison, one of whom is seriously hurt during the hunt.

After Bear’s group have taken possession of the Bison meat and the ‘Longheads’ have been sent on their way the injured Neanderthal is taken back to Bear’s tribe. Bear doesn’t want to provoke a war between the tribes so Raven tends to his injuries until he is released. There’s a marked affinity between Raven and the ‘Longhead’ and when she awakens one morning to find him gone, she follows him to say goodbye. The idea of the choice Raven makes that day impacting on the genetic history of modern man is fascinating.

Raven’s life with her sister’s tribe is hard, she is at the mercy of Bear, the tribe leader, as he tries to impregnate her. Women who don’t bear children are expendable. At Willow’s instigation, she faces the prospect of a binding ceremony to proclaim her position as Bear’s second mate.

Raven is eventually driven from her sister’s tribe, despite Willow’s efforts, and sets out to make her way across unforgiving lands, facing an uncertain fate. And although she wouldn’t be alone for very long, there were still many dangers to face.

In the future, as Mark finds out, many people including himself, carry Neanderthal genes although he’ll never know for sure the exact circumstances that brought about this occurrence. But it points to the fact that Early Modern Man didn’t take the place of extinct Neanderthals but rather the races mixed and interbred, which is proven by the presence of Neanderthal DNA in present day man. It’s such an interesting approach to how life might have been all those thousands of years ago.

When circumstances prompt Mark to travel to the Levant to collect his uncle’s ashes, and meet his cousin for the first time, his footsteps eerily trace those of his early ancestors. His journey proves to be a complicated and life threatening one and the two worlds overlap in an extraordinary and uncanny way.

This well written, imaginative and obviously extremely well researched story is a richly historical and credible account of a very distant past and the impact on us all. Characters are distinct and believable, the landscape of the late Pleistocene, it’s flora and fauna, all vividly described, prompting clear images throughout.

I chose to read and review The Replacement Chronicles for Rosie Amber’s book review team, based on a digital copy from the author.

This omnibus edition of The Replacement Chronicles contains Raven’s Choice, Journeys of Choice, and Choices that Cut.

What possible link could Mark Hayek, an introverted twenty-first century research scientist, have to Raven, a young healer who lived during the late Pleistocene? It has everything to do with an injured Neanderthal man taken captive by Raven’s band while he and his brothers were hunting bison.

After Raven heals the captive, he leaves for his tribe, and she tries to forget him as she struggles to remain within the band. But it’s not possible to stay when several band members make her life with the group untenable. Seeking the Neanderthal man she’d helped and facing her fear of being alone on the dangerous steppes, she begins crossing that grassy land—but a woman like Raven isn’t destined to be by herself for long.

In the future, Mark Hayek is forced into making his own journey when his uncle dies in the Levant. His travels place him firmly in the footsteps of his Neanderthal and Early Modern Human ancestors, crossing the same ancient lands as he struggles against the fate a wayward kinsman has imposed. He’s been made a pawn in a cruel game, but when he encounters a woman being held prisoner in a cave, he seeks a way to save her. Help arrives for the pair, flowing from an unexpected, ancient source, igniting a struggle deep within Mark to accept that the illogical as well as the logical make up existence.

Peoples come and go, one group replacing another over time, and echoes from ancient events have always affected the future, but Mark and Raven discover that in certain environments echoes are able to bounce back and forth, blurring their origins. 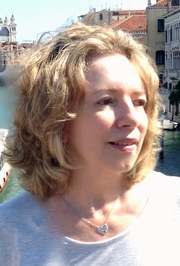 Harper Swan lives in Tallahassee, Florida with her husband and three sweet but very spoiled cats. Her interests include history from all eras, archaeology and genetics. She especially enjoys researching ancient history and reading about archaeological finds from Paleolithic sites. As well as writing stories with plots based in more recent times, Harper is also following a longtime dream of writing books that include the distant past, her inspiration drawn from Jean Auel.Harper is the author of The Replacement Chronicles, a three-part series. The series titles in order are Raven’s Choice, Journeys of Choice and Choices that Cut.The series is now available as an omnibus issue containing all three parts going by the title, The Replacement Chronicles. This novel is available in both paperback and e-book. Raven’s Choice is also published as a standalone e-book and is free on iBooks and Amazon for as long as the latter allows it to be so. Journeys of Choice and Choices That Cut are both contained in an e-book entitled Journeys of Choice. If you enjoy her writing, Harper is presently giving away Gas Heat—a story of family angst that takes places in the Deep South—to anyone who would like to subscribe to her mailing list. Just use the link below.