Today’s Team review is from Jessie, she blogs at http://behindthewillows.com

Jessie has been reading The Magician’s Workshop by Christopher Hansen and J.R Fehr. 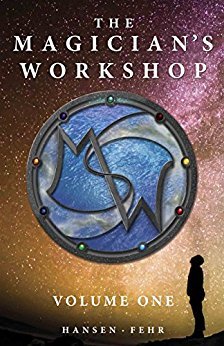 Having loved fantasy for many years I’m often startled by people who complain about books that dump them into a new world without explaining things. Personally, jumping headfirst into a new mysterious world is one of my favorite ways to start a book.  But the authors of The Magician’s Workshop understand that not everyone (particularly young readers) may enjoy such a thing.  So they start with a bit of a disclaimer as the preface, likening trying a new book to starting summer camp. It might seem scary and uncertain, and you might not know if you’ll like it but you should try it because chances are good you will love it!

Sadly, no doubt because Mom suggested she read it, it didn’t sway my daughter.

Which is too bad because, for a young girl who likes reading books with magic in them, I still think she’d like this one.

The Magician’s Workshop dumps you straight into a pile of characters living in their crazy island world where everyone can work magic. And as the characters go about life projecting magic images, flavors and smells, the authors slowly start to introduce some of the difficulties that come in such a fantastical world. What do you think? Would you bother eating real fruit if you could eat something that tasted like fruit instead?

Would I recommend it? For a magic loving pre-teen/teen audience these books could be just the ticket. And, although I have no credentials to back it up, (remember me? I’m a woman with three daughters) I think that boys would really like these books too.  Fair warning, as it says in the beginning, this is the first of a series of books that is more like a television series. Which is true, at the end there is no real conclusion or even a cliff hanger, just a fade out until you start the next book (which is okay because volume two is available on Amazon already!).