Terry has been reading Ardent Justice by Peter Taylor-Gooby 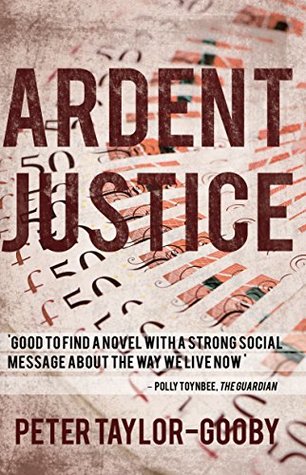 Ardent Justice is a novel that brings to light the corruption in the financial world of the City.  After a brutal rape by a rich financier, tax inspector Ade becomes involved with Paul, an activist who works with homeless people.  Together they become modern day Robin Hoods, determined to expose the fraud within the City and help the poor, fighting the power of money and influence of back-hander paid officials.  The novel is billed as a character-led feminist thriller.

I found the explanation of how fraud works within the city fascinating, and certainly confirmed much that I suspected; alas, this is how business has been done for hundreds of years, after all, the only difference being that today it is on a much larger scale and has more devastating and widespread consequences.  There is no doubt that the book brings to light societal problems that will be an eye-opener for some, but I’m afraid that, for me, it didn’t work as a novel.  The characters were one-dimensional; Ade came over as bitter towards the world rather than feminist, though aside from this she was never more than words on a page for me; I didn’t believe the characters as, on the whole, the portrayal of emotion was not convincing, dialogue was unrealistic, and I found the narrative disjointed.

The proceeds of the book will go to Shelter, the charity for the homeless, so I am sorry not to be able to be more positive.

Ade is a tax-inspector. She hates the City of London. She hates the endless corruption, the bland assumption that tax is for the little people. She hates the casual sexism, the smug self-assurance, the inviolability of the men she deals with, and the cold certainty that nothing you can do will ever touch them.
She finds herself in the world of the rootless, marginal street homeless who live meagre lives in the shadow of the office blocks that house the rich. She meets Paul, an Occupy activist who works with homeless people. As their love for each other grows, they find real fulfilment in fighting for the rights of ordinary people, such as Gemma, a homeless single parent.
Ardent Justice is a gripping feminist thriller, endorsed by Polly Toynbee, the leading Guardian columnist. It tells the story of Ade’s struggle against the City and for her own integrity, and of her love for Paul, and of how hard it is to live a morally good life in a corrupted world. It has been inspired by Zoe Fairbairns and Lionel Shriver and will appeal to fans of character-led thrillers. Profits will be donated to Shelter, the housing and homelessness charity.

My novels deal with how people live their lives in a diverse globalised capitalist world. In ‘Ardent Justice’, Ade struggles against the corruption of the City of London, where high finance and street homelessness flourish cheek by jowl. In ‘The Baby Auction’ Ed and Matt struggle to lead a passionate, humane and generous life in a world dominated by the market.In my day job I’m an academic. My research shows how market capitalism generates inequalities between haves and have-nots and promotes a corrosive individualism that stunts our capacity for empathy, charity and love.I enjoy hill-walking, riding my bike, holidays and looking after my grand-daughter (not in that order). I became interested in social policy issues after working on adventure playgrounds, teaching, claiming benefits and working in a social security office in Newcastle. I’ve worked in the UK, most European countries, Canada, the US, China, Korea and Japan, Australia and South Africa.