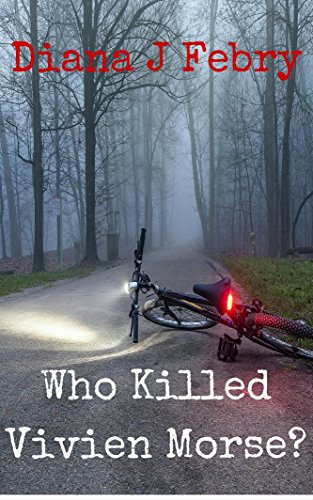 Although I haven’t read the preceding books in the series, this wasn’t too difficult to settle into. DCI Hatherall is waylaid by the local, loves to complain, busybody, Glenys Pitman, who is well known at the police station. She has seen a man dressed in Druid robes behaving suspiciously in the woods. A humorous exchange follows before DCI Hatherall is able to usher Glenys on her way. Returning to his office, his partner DI Fiona Williams informs him the body of a young social worker, Vivien Morse, has been discovered in Silver Lady Woods.

Vivien’s estranged husband, Nigel, is the most likely suspect for her murder initially. That is, until Vivien’s supervisor goes missing and a prison inmate along with his paranoid and obviously disturbed erstwhile girlfriend, are thrown into the mix. The list of suspects grows. Although Fiona is still convinced there’s something off about Nigel, it seems the client Vivien visited before her death could be linked to the murder and missing supervisor.

This is a well thought through and tightly woven mystery with a twisty, somewhat convoluted plot, requiring plenty of concentration, and unconventional characters. I particularly enjoyed the Druid, Dick Death (or Dee-ath as he likes to pronounce it), his (female) dog, Colin and over the top Gladys. There’s a feeling of some sort of history between Peter and Fiona, but not having read the previous books, I’m not sure how accurate that is. And it seems Fiona’s current relationship might not be all hearts and flowers.

The humour and banter offset the darker side of the story extremely well. Vivid and atmospheric descriptions convey a real sense of the locations and characters. From the start I could picture Peter Hatherall – a man approaching middle age, with a younger, second wife, resenting the fact he had to work at keeping in shape but proud of his full head of dark hair. He is purposeful and determined to find the murderer, and won’t run with an obvious theory until he has explored every avenue. There are plenty of threads to unravel and needless to say, I didn’t guess the outcome.

Well written with sharp, witty dialogue, a fast paced, intricate plot and a mix of quirky and interesting characters makes for a very enjoyable read.

I chose to read and review Who Killed Vivien Morse? for Rosie Amber’s book review team, based on a digital copy from the author.

Vivien Morse, a young social worker is discovered battered to death in Silver Lady Woods. Everyone assumes she was attacked by her estranged husband until her supervisor disappears. The connection appears to be Vivien’s last client. A damaged and disturbed girl who believes a bundle of rags is her lost baby and never leaves the family farm while she awaits the return of her lover.