Barb has been reading After The Fall by Rich Marcello 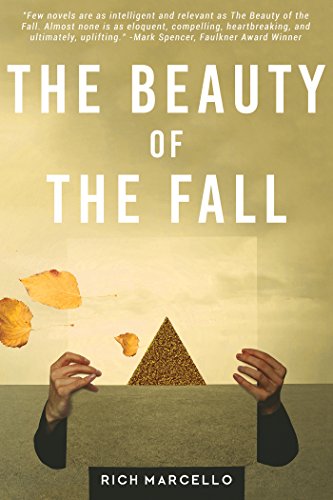 Confession. I read The Beauty of the Fall on my Kindle. As I usually do for reviews, there were many pauses to highlight or bookmark or make notes, especially of some particularly beautiful phrase, metaphor, or line of poetry. At least, until my Kindle crashed, and the entire book disappeared into the unforgiving ether. After I downloaded the book again, and finished reading, I realized that my notes didn’t matter.

The reasons I love this book are broader even than the beautiful writing. And they are as precisely narrow as the definition of “fall”—a thing you can name, and a thing you can do:

On one level, The Beauty of the Fall is about one man’s straightforward journey to building a successful company. On another level, it’s almost a metaphor for what love looks like—as a lover, a father, a colleague, a friend.

Dan—who has failed at all those things—is still surrounded by people (mostly women) who love him in different ways. There is the almost maternal care from his therapist Nessa. Wilow’s spiritually romantic love energizes Dan and gives him permission to succeed with his idea for a new company. The frankly sexual physical act from prostitute Katie literally crucifies him even as it provides relief. Dan is left with the realization that his single most successful relationship, at least in terms of time spent together on a daily basis, is with Olivia his oldest friend/enemy. But in a bittersweet act of hope at the end, Dan not only realizes that he’s achieved all his goals, but that success even provides a surrogate daughter figure who seems to combine the best of himself and Willow.

There are a few things that didn’t ring true for me here. Time periods to develop world-changing software, let alone propel new companies into the stratosphere were astonishingly brief. I would have liked to see more actual content in the building of the company, but maybe that’s just my been-there-done-that experience. There were a few times when important information is slipped in as flashbacks or later recollections, taking me out of the story as I tried to figure out what happened and when. For example, I found it annoying to have to wait to find specifics of Zach’s death, or to realize what happened to Willow. And don’t even get me started on passing Equal Rights Amendment—languishing before Congress since the 1920s—in one year with the help of speedy-developed tech.

But all that pales beyond the achievement of this rich and layered novel. Anyone who has ever worked for a tech company will recognize the trappings—the fancy espresso machines, the sense of mission that makes a business into a cult of leader personality, the feeling that sacrifice of time, sleep, and occasionally hygiene will lead to the holiest of grails, the IPO.

And there is the other, darker side of business success in the toll it takes on personal relationships. Dan’s self-awareness is brutally honest: “With each of my lovers I didn’t have the same joy I got from work, or later the joy of being a dad I had with Zack. The truth: my best romantic relationship, if one judges such things by length, was unromantic. I saw Olivia almost every day for sixteen years, and I loved her. Together we were better than we were alone. We had a vision and a purpose; we built something that lasted.”

Author Rich Marcello draws on his own corner office experience to nail so many aspects of this story. I particularly liked his depiction of savage power struggles. Pitted against longtime friend and adversary Olivia, Dan realizes: “This is as much about power as it is about content, and any emotional break in my voice will confirm in front of the whole board that Olivia is the pack leader.” And then…wait for it: “Olivia smiles as if the blood is already on her teeth.”

That kind of spectacular writing, interspersed with actual poetry, business vignettes drawn from life, and development of a deeply flawed, complex, and charismatic main character made this one of the best books I’ve read this year. For anyone with a technology background, The Beauty of the Fall is a must read. For everyone else, it’s a present right now, even as fall’s beauty heads to winter.

TECHNOLOGY EXECUTIVE CHARTS A HIGH-RISK, UNCONVENTIONAL PATH WHILE GRIEVING THE LOSS OF HIS SON

Dan Underlight, a divorced, workaholic technology executive, suffers lingering grief over the death of his ten-year-old son, Zack. When Dan’s longtime friend and boss fires Dan from RadioRadio, the company that he helped create, he crashes and isolates himself.

Willow, a poet and domestic violence survivor, helps Dan regain his footing. With her support, Dan ventures on a pilgrimage of sorts, visiting Fortune 500 companies to flesh out a software start-up idea. He then recruits three former RadioRadio colleagues and starts Conversationworks, a company he believes will be at the vanguard of social change.

Guided by Dan’s leadership, Conversationworks enjoys some early successes, but its existence is soon threatened on multiple fronts. Will Dan survive the ensuing corporate battles and realize the potential of his company? Or will he be defeated by his enemies and consumed by his grief?

Rich is a poet, an accomplished songwriter and musician, a creative writing teacher at Seven Bridges’ Writer Collaborative, and the author of three novels, The Color of Home, The Big Wide Calm, and the forthcoming, The Beauty of the Fall, due out in 2016. Previously, he enjoyed a successful career as a technology executive, managing several multi-billion dollar businesses for Fortune 500 companies.
The Color of Home was published in 2013 by Langdon Street Press, and melds together honest generative dialogue, poetic sensory detail, and “unforgettable characters who seem to know the complete song catalog of Lennon or Cohen.” The Big Wide Calm was published in 2014, also by Langdon Street Press. The US Review of Books stated, “Marcello’s novel has a lot going for it. Well-written, thought-provoking, and filled with flawed characters, it meets all of the basic requirements of best-of-show in the literary fiction category.” The Beauty of the Fall will be published in 2016. Faulkner Award Winner Mark Spencer commented, “Few novels are as intelligent and relevant as The Beauty of the Fall. Almost none is as eloquent, compelling, heartbreaking, and ultimately, uplifting.”
As anyone who has read Rich’s work can tell you, his books deal with life’s big questions: love, loss, creativity, community, aging, self-discovery. His novels are rich with characters and ideas, crafted by a natural storyteller, with the eye and the ear of a poet.
For Rich, writing and art making is about connection, or as he says, about making a difference to a least one other person in the world, something he has clearly achieved many times over, both as an artist, a mentor, and a teacher.
Rich lives in Massachusetts on a lake with his family and two Newfoundlands, Ani and Shaman. He is currently working on his fourth novel, The Latecomers.