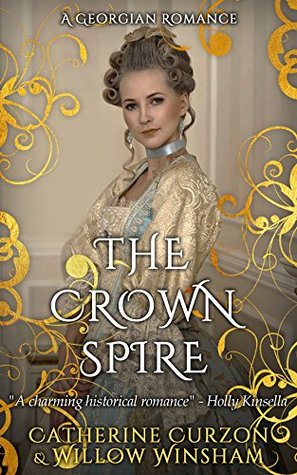 Do you yearn for the world of dashing highwaymen and spirited women in glamorous 18th century dresses? Then be careful what you wish for. This is also a world in which only men have power and marriage can be a trap.

In The Crown Spire we become acquainted with Alice Ingram married for 20 years to an abusive, unpleasant man and her young niece, Beth, who is completely unaware of her aunt’s unhappiness. Fleeing along the Great North Road, they are suddenly in dire danger until two masked men save them and deliver them into the safe hands of the Bishop of Edinburgh. Both women find it difficult to forget their rescuers but once in Edinburgh they become entangled with two other men. Beth is quickly captivated by charming innkeeper Edward Hogan, even though he is well below her station but Alice maintains her dignity and has constant arguments with respectable doctor, James Dillingham.

Edinburgh of 1795 is, as you might expect, a city of charm and danger, but the lack of propriety shown by Beth is astonishing. Alice is a more empathetic character and the reader enjoys becoming closer to the reticent doctor. As in all good fiction, they have secrets, but love and passion will conquer all, until the dramatic events of the last section of the book threaten everyone’s happiness.

The description of the taverns give a sound historical authenticity to events but personally I would have liked to have read more about everyday life in the streets of Edinburgh. The fast-moving story is difficult to put down and I hope that there will be other romantic adventures, in this style, to follow.

'an amateur sleuth #mystery with a touch of romance set mainly in Toronto.'
'Backstories is a great idea. Take famous people from history, ancient or more recent, and write a short backstory about them allowing the reader to uncover who they are as the story progresses.'
‘one of the most poignant, beautiful vampire stories I have ever read, those are not words written lightly.’
'Goodwin captures perfectly the atmosphere of the mental health asylums, where routine was sacred, and everybody had a part to play'
Based on a true story, Frank reviews #historicalfiction The White Rajah by Tom Williams which is set in Sarawak (North Borneo), for Rosie's #Bookreview Team #RBRT
'a series of easy-read short stories, each one an imagined snapshot of the early years of well-known person, but 'the reveal' doesn't come until the end'
'I could not fault the historical detail.'
'an intriguing story set in the heart of Dublin'
'An upper end young adult and new adult horror with a same sex romance.