Grind by Edward Vukovic
My rating: 4 of 5 stars

Grind is a contemporary piece of literature set in Melbourne, Australia and follows five different characters towards an end when it is revealed how they are all connected. Throughout the story coffee is a common thread linking them all. The book is primarily written in first person from multiple points of view.

Ziva is Eastern European, with a gift of sight, she reads the signs left by the dregs in strong Turkish cups of coffee. She has come to Australia, following her brother and his wife, but she struggles to make friends and fit in.

Isaac owns a bar, he mourns the loss of his wife who died several years ago, he owns a dog he names Dante and he writes poetry.

Simon is a struggling estate agent, when he’s late for work one day a colleague takes the call about a property he’s been trying to sell for ages and makes the deal. His day gets worse when he finds the others in the office have also stolen his supply of precious coffee and it tips him over the edge, sending him on a dangerous drinking spree.

Michel is a mysterious homeless man with a shocking past and one he tries to escape, fearing violence from the bosses he stole from, he hopes his new life will keep them away, instead his past deeds return in an innocent form to haunt him.

Danielle is a schoolgirl who brushes the lives of all the other characters as they meet her one by one at a traffic light crossing.

This book takes a bit of getting into, especially as there is no indication which character each new chapter is about. The first person narrative is not necessarily the fault, but perhaps helpful chapter headings with just the character’s name would ease the reading experience. As it is, each new chapter takes a bit of time to work out who is talking and it interrupted the flow of the story for me.

The good thing is that there is plenty of rich writing to indulge in and the coffee theme is fun and well done. I particularly enjoyed Ziva’s coffee cup readings. Harder for me was the teasing out of the characters, it took a long while to understand that there were several characters and that the story had changed to someone new, meaning I had to re-read sections. We got to know the characters from their background story build ups but not from any striking dialogue or minds-eye visualisation.

“Ziva’s love of coffee is double-edged. Throughout her life, she gives her talent freely to those desperate for a glimpse into destiny’s promise. Predicting the future with chilling accuracy, she understands the cost and has sworn never to divine her own truth. Having fled the economic aftershocks of the Balkan war, she struggles adjusting to her new life and clings to the remnants of her past, until she meets Isaac. Against her better judgement, Ziva ‘reads’ for herself and what she sees will change her life irrevocably.

Told from the perspective of multiple characters, Grind follows the plight of Ziva, an ordinary immigrant with an extraordinary gift, and highlights the impact we have on each other through the interconnectedness of chance encounters.” 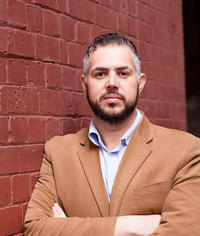 Edward Vukovic is a Melbourne-based writer and novelist. He has work published across numerous publications including The Journal, The Adviser, The Roar and Shoot Farken. When he’s not writing about his poor parenting skills or fantasy football you will most likely find him hurling instructions at the television, steadfast in his belief that the players of whatever sport he’s watching at the time are actually listening to his ranting.Edward is married to his wonderful and talented wife Vesna and is a proud, if sometimes bewildered, father to his amazing son Oliver.