Noelle has been reading A Shortcut To Murder by William Savage 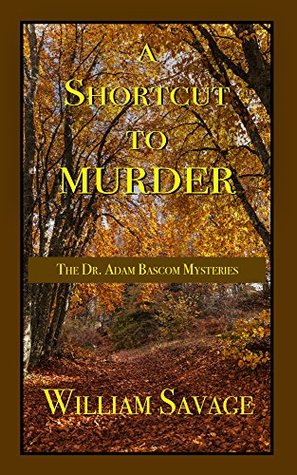 A Shortcut To Murder is the third in The Dr. Adam Bascom Mysteries set in Georgian England. I’ve read the first two and was intrigued by the historical setting and, since I’m married to a physician and taught medical students for years, was drawn to the sleuth.

The main character, Dr. Adam Bascom, practices medicine in Aylsham, a small town in Norwich. His closest friend, and the person off of whom he bounces ideas, is Peter Lassimer, a pharmacist and a confirmed ladies’ man. Indeed, Dr. Bascom’s unmarried status is the subject of many of their interchanges and a thread running through this book, as in the first two, but with more intensity.

After solving the previous two murders, the good doctor is anxious to get back to treating patients, and his first is the nephew of Lady Alice, young widow of one of Bascom’s former patients. Bascom becomes progressively drawn into this family and drawn to Lady Alice as the story evolves. However, he is interrupted in his practice yet again, this time called by his brother, Giles, a magistrate, to confirm the findings of a local coroner in the death of Sir Jackman Wennard, a local landowner, debauching scoundrel, racehorse breeder and baronet. His son, now Sir Robert, is an equally repugnant character and refuses to accept that his father’s death was anything more than an accident.

Sir Jackman was killed by a blow to his body, which caused him to fall off his horse and break his neck. Bascom quickly confirms the injury he sustained could not have resulted from a simple fall, but rather from running into a rope, which flung him back and all but severed his head from his body. There are many unresolved questions and as some are answered, others emerge. How could the blow be delivered with such force? How could the killer have known where and when to lie in wait? – especially since no one could have foreseen Sir Jackman’s movements on the morning of his death.

Who is the woman who caused Sir Jackman to take the path he did that morning, and why is his son so determined to prevent the lawyers from assessing Jackman’s belongings in order to probate his will? Piling on to Bascom’s confusion is the kidnapping of Sir Robert. Is it related to the rash of highway robberies plaguing local roads?

This is the densest of the author’s mysteries yet, with many threads that as they are pulled, reveal others. It also adds more depth to the main character, his determination to find the answers, his insight, and also his confusion about himself – does he want to remain a country doctor and how does he truly feel about women? Add to that a wealth of detailed information about life in Georgian Norwich, all of which gives the reader a rich slice of life at that time.

There are some drawbacks to this novel: there are long dialogue dumps and there is repetition galore as Bascom goes over and over what he knows with various friends and family. As I result, I did skim some pages.

Overall, though, I enjoyed this book as much as the previous one and would recommend it to anyone who likes historical mysteries.