Today’s Team Review is from Jessie she blogs at http://behindthewillows.com 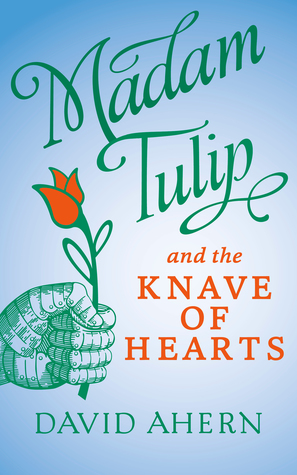 I’m so grateful that I was once reeled in by a cute frog on the cover of a book. That book, Madam Tulip, introduced me to Derry O’Donnell and her accompanying, charmingly over the top, literary comrades.

David Ahern’s newest book cover isn’t as cute…… but that’s alright because I loved it even more!

Would I recommend it? Yes! This is the new series I’m recommending to anyone who loves a humorous mystery! It made me giggle (so many times) and almost gag (there’s an eyeball…) and had me on the edge of my seat (Well, that’s just a lie on my part. I was reading in bed. But it did have me refusing to put the book down and go to bed at a reasonable time) all at once. A perfect fun, quick read!

Madam Tulip! Actress, fortune-teller, psychic, sleuth!
When out-of-work actress Derry O’Donnell moonlights as celebrity fortune-teller Madam Tulip in an English Stately home, she’s trying to make some cash. Instead, she is drawn into an alien world of wealth, titled privilege and family secrets.
A countess once a chorus girl, a gambling earl and his daughters, a cultured and handsome art expert—all caught in a terrifying web of ghastly threats, murder and abduction. As an aristocratic engagement party turns into a nightmare, Derry and her friend Bruce face the prospect of a gruesome and infamous death.
Madame Tulip and the Knave of Hearts is the second in a series of thrilling and hilarious Tulip adventures in which Derry O’Donnell, celebrity fortune-teller and reluctant amateur detective, plays the most exciting and perilous roles of her acting life, drinks borage tea, and fails to understand her parents.