Noelle has been reading Murder & Mayhem by Carol J Hedges 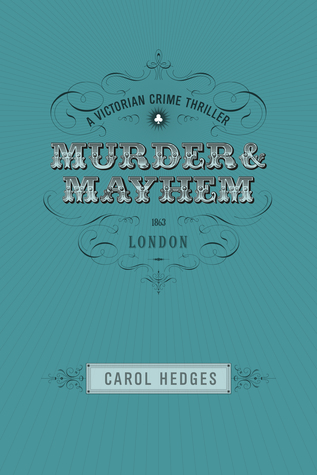 I’ll start by telling you how much I enjoyed this mystery. It’s a bit different from the mysteries I’ve read to date, but it is a smashing historical who dunnit.

Set against an exquisitely detailed Victorian London – I could see myself there – the story is told from multiple points of view, each character fully developed. It begins with the discovery of the corpses of infants in the basement of an abandoned house on a street in the middle of demolition for the railway system. Inspector Lachlan Greig of the Bow Street Police has become aware of dark practice of baby farming (women and men who will take someone’s child and a sum of money for “looking after” on a permanent basis) and it falls to him to find the murderers.

A second thread involves two school friends – Daisy Lawton, daughter of a wealthy physician who lives in the lap of luxury and wants for nothing but marriage to a handsome man of social standing, and Letitia Simpkins, daughter of a penurious widower who treats her like a servant. She disdains marriage but craves for higher education and the employment that would bring, in order to get her away from her family. Daisy becomes engaged to a wealthy young man headed for Parliament but with a shadowy life with prostitutes and a decent woman carrying his baby. Letitia meets a librarian, Sarah Lunt, who believes Ladies should be educated and trained for a profession, and she quickly becomes the only light in Letitia’s gloomy life.

Add in a couple of anarchists with catchy names — Edwin Persiflage and Danton Waxwing – who work as clerks but who have deep grievances against the rich and privileged and who are determined to blow up parts of London, and Inspector Greig has another problem on his plate.

I loved the rounding of all the characters, major and minor, and especially gas-lit, crowded and filthy Victorian London, a character unto itself. The author is at once humorous and heart-breaking in her descriptions, never more so than in the plight of women in that time. The depth of her research and the colorful details with which she decorates the story lines is exceptional.

Ms. Hedges breaks the wall and talks directly to the reader at the beginning of the book (which is when it should be done, if at all), and most charmingly pulled me into the story.

Every aspect of this read was a delight, and I am looking forward to the next book!