E.L has been reading Glossolalia by Tantra Bensko 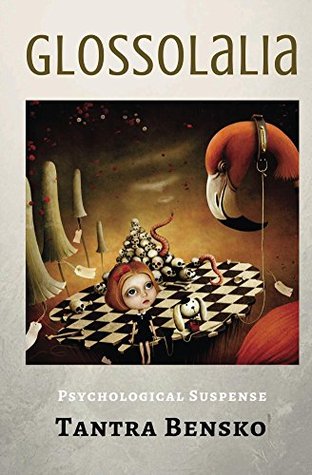 Glossolalia by Tantra Bensko has the subtitle, a psychological suspense, but I’m not sure this reflects the true nature of the novel. It’s a story that is impossible to categorise and quite possibly the most unique book I’ve ever read.

It’s a complex and surreal story which highlights lots of modern dilemmas, chiefly by using irony and exaggeration. The imagery that Bensko creates is both visual and bizarre. The only way I can think of to explain it is – imagine staring at a Salvador Dali painting whilst on speed because the pace of the novel is almost neck breaking.

Bensko’s protagonist is a character called Nancy. It’s quite difficult to get a real sense of Nancy as, due to her fragmented mental state, she is a very unreliable narrator. She is being used as a pawn by a group called the Neverminds, who are basically running a mind control programme. Nancy has been split into compartments by the Neverminds so that she is three different personalities. They accomplished this by traumatising her as a young child and then keeping her medicated.

The novel works on the premise that the world is controlled by an alliance of the US government, church and big business, who use mind control to ensure that the world is run as they see fit. The glossolalia of the title is a language used by the powers that be to create a hypnotic effect. Hence once they hypnotise someone they use the secret language to control their behaviour. Bensko offers us a world where power corrupts. Nancy works for her Uncle Geoff, an agent of Nevermind and the owner of D-CIDE, an unscrupulous pesticide company. The chemical XXX which is used in the pesticide is known to have killed both humans and animals but the corruption within the establishment is such that Geoff is given the job of investigating chemicals that are harmful to the environment.

Geoff colludes with the charismatic Reverend Terry Crank who has incredible power within the church despite being a sexual deviant. He is also an agent of Nevermind and uses his position to control and eliminate any opponents of the status quo.

The levels of corruption run so deep it’s hard to know who is part of the Nevermind conspiracy and who is actually a genuine character. The main anti-Nevermind voice is an activist called Elias Brandon who runs an online blog exposing wrong doing. He is so shrouded in mystery and bizarre however, it just adds another layer of distrust and confusion.

Nancy also has an online friend called Jeff who, when he visits her turns out to be a sinister childhood associate with hands fashioned to look like flamingos, which he then uses to control her mind. There is a love interest called Julio who again seems like a shadowy character which makes us doubt his authenticity.

There is no doubt that Bensko is a talented, intelligent writer and she successfully gets us to question everything by making us doubt our own perceptions. She maintains control over her writing despite taking it to such surreal heights that her readers have no choice but to suspend all reality.

I suspect that Glossolalia will appeal to a niche audience who will absolutely love it. The problem I had is that I didn’t really get it and this was more to do with me than the actual novel. It’s a bit like some people love Terry Gilliam films whilst others are left feeling out of the loop. I’m not sure if my inability to connect was cultural because the book is very American or caused by the fact that I’m quite conventional and couldn’t immerse myself fully into the madness.

I would definitely recommend that you give Glossolalia a try. It’s a brave and unique story and Tantra Bensko is an assured writer. I’m willing to bet that if you connect with it this novel may well turn out to be one of your all time favourites.