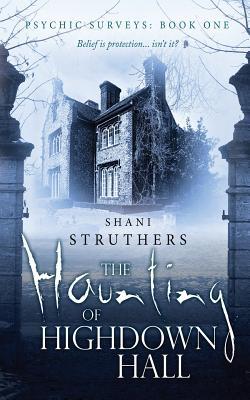 In the late 1950s Cynthia Hart was a beautiful and sought after, if egotistical, movie star about to secure her place on the world’s stage. It was Christmas Eve 1958 and Cynthia was hosting a lavish ball at her country house, celebrating her thirty-first birthday. Little did she know it was to be her last.

Fast forward to present day where we meet Ruby Davis and her team of freelance psychics, Corinna, Theo and Ness, who help earthbound spirits enter the light. Ruby believes wholeheartedly that the power of love helps reluctant or confused spirits on their way. Psychic Surveys is just beginning to make a name for itself, their reputation growing, when Theo goes to survey Highdown Hall, a house in Sussex which used to belong to a famous film star. This case will challenge Ruby’s long held beliefs regarding good versus evil. The Psychic Survey team, along with Ruby’s developing love interest, Cash, and a Jed, a spirit dog, take on a lot more than they bargained for with the haunted Highdown Hall.

This is an enjoyable, easy read. I liked the story and subject matter and, although it’s a little lightweight for me, I was warned this is more paranormal suspense than horror. I believe the following stories get progressively darker so I’ll definitely move on to book two. The only complaint I have is that the narrative felt too long drawn out with unnecessary details in places and more telling than showing initially and so, for me, could do with a little tightening up. Other than that, the writing is good and the story well paced.

The characters are convincing and likeable. Ruby is a warm, compassionate person, dedicated to helping grounded spirits to move on. The plot surrounding Cynthia and why she can’t leave her bedroom is interesting and, as the truth is gradually uncovered, there’s a great twist at the end. There’s also a mystery surrounding Ruby’s mother which hopefully will be revealed in the next book.

Shani Struthers’ concept of what happens after death is a lovely thought, fascinating in it’s straightforwardness, although it seems for some the transition could be more complicated and scary.

I did notice there’s a prequel entitled Eve, which I wanted to read before I wrote my review, and enjoyed very much. It’s a good introduction to Theo and Ness, how they started working together and eventually had the germ of an idea which develops into Psychic Surveys. This story is a little darker, set at Christmas time and encompasses a heart breaking tragedy. Well worth starting with.