Terry has been reading Occupying Love by Marilyn Chapman 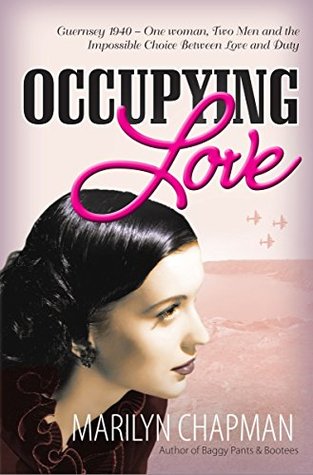 Occupying love is a historical romance set in Guernsey during the occupation by the Nazis during the second world war. Lydia Le Page returns to Guernsey from England on a momentous day: the first bombing on British soil during the war.

Lydia is, thus, trapped on Guernsey and has to put on hold her plans to train as a pharmacist. Happily reunited with her best friend, Maggie, and having met the mysterious new rector, Martin Martell, life seems bearable even though Lydia feels annoyed by the way some are more accepting of the island’s fate than others, particularly Maggie, who is quite taken with the German soldiers.

The fates of Lydia’s family take a turn for the worse when Germans decide to occupy not only the island but also their house, forcing them to lodge with friends. Lydia takes a job that means she gets to know Martin better, though both his activities and his personality remain something of a conundrum to her. Then another suitor enters the arena…

I think this is a book for an older readership, as the tone is one of the British pulling together against the enemy, with a fair bit of domestic detail. The characterisation and dialogue are reminiscent of 1950s films about the war, so it would appeal to readers who enjoy the current popularity of nostalgia orientated books, and/or who live in or have some knowledge of Guernsey

The book is well presented, and competently edited.