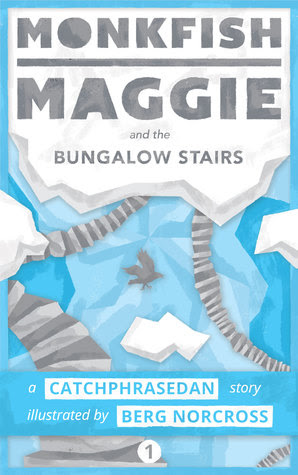 I read this aloud to all three of my girls: ages 9, 6 and 4. The lack of princesses and other glittery creatures meant the four year old was only listening so she could put off bedtime. My nine year old was convinced it was too scary, but in the words of my six year old, “It’s not scary, it’s exciting!” It was also funny (at least I thought it was funny) and I’m pretty sure my nine year old would have thought it was funny but she was too busy avoiding us in case it was scary and then demanding a run down of everything that happened because she really wanted to know even though she couldn’t quite admit that she really wanted to know. (Insert eye rolling mother and indignant child noises here.)

Would Ivy (9) recommend it? “I would recommend it because I think it’s like an imaginary story and people who like fiction and magic would like it.”  (Ha! I knew she liked it!)

Would Clara (6) recommend it? “Yes, I already tried to tell my friend about it… because it’s really funny!”

Would Jane (4) recommend it? “No. Cause I think it’s too boring.” (Sorry guys, you needed more sparkle to get this little girl’s attention!)

Would I recommend it? I would! All my girls listened to the story, even if some were more spell bound than others, and I loved the humor. Lines like, “Before you ask, a dictionary is a large dusty book that people kept around before the internet was invented” made me giggle louder than my kids.