Today’s team review is from Olga, she blogs here, http://www.authortranslatorolga.com

Olga has been reading Wings Of Mayhem by Sue Coletta. 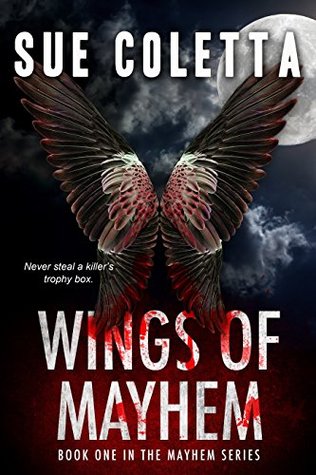 And now my review:

I’m writing this review as part of Rosie’s Book Review Team. Thanks to Rosie Amber and to the author, Sue Coletta, who provided me with a free copy of the novel in exchange for an honest review.

I hadn’t read any books by the author before but the description of this novel, the first in a new series, caught my attention. I read thrillers often and it’s sometimes difficult to come across a book that finds a new angle on the subject or has something to offer to make it worthwhile for the avid reader of the genre. In this particular book, the main protagonist of the novel, Shawnee Daniels, is pretty special. She is a forensic computer analyst working for the police by day, but she has a double life and is a cat burglar by night. But although we learn that she used to be a fully-fledged cat burglar at some point, she’s now a Robin Hood-like figure, stealing from baddies (mostly rich people who’ve committed fraud or come into their money by other devious means) to give to good causes. (Later in the novel somebody tells her that turns her into a vigilante, although she does not use violence and is a complete novice to things like firearms. I understand their argument but I’m not fully convinced.) In one of her nocturnal excursions, she picks ups valuables (gold, diamonds, a puzzle box and other trinkets) from a fraudster’s house. Rather than leaving with her booty she can’t help herself, and making good the well-known adage, her curiosity gets her into a whole lot of trouble. She discovers the hidden lair of the latest serial killer, ‘the Creator’. The description of what this murderer does to his victims (very twisted and extreme) made me think of one of the other reviewers in the team who used to teach Anatomy. Indeed this is not for readers who like tame mysteries, as there is explicit violence and a great deal of detail.

The story is told mostly from Shawnee’s point of view, in the first person, although towards the end we have some chapters from one of the detective’s point of view, Levaughn Samuels, a very attractive cop and Shawnee’s love interest. Indeed the novel is not only a hardboiled psychological thriller, but it has elements of romance (with some sex and all, not the most explicit I’ve ever read but not squeaky-clean either), with a somewhat idealised Leavaughn (he’s not only attractive, but loves Shawnee despite not knowing her very well, and accepts her, no matter how much she lies or the things she hides for him, and he’s OK with her shady life too. And yes, he’s there to protect her, even when she resists his best efforts).

Shawnee is a fascinating character. I hope we’ll get to learn more about her in future books, because although we get some snippets of information (we know her parents died and she was brought up in foster homes where bad things happened, and we learn that she later became a cat burglar and is very good at it. She’s also great with computers), but a lot remains unexplained. She appears strong and savvy, but she’s emotionally frail, has low self-esteem and she alternates between being self-confident to the point of boastfulness, and presenting as insecure at other times. She makes terrible decisions, and at times I wanted to shake her for being so selfish and egotistical, only interested in her survival. Because of her insistence in dealing personally with everything and not confessing to her double life to protect herself, other people suffer, and are put at great risk, even her loved ones. Her self-control goes to pieces when the serial killer kills one of her cats, and she becomes totally undone when the Creator attacks her best friend (who is a bit of a comedy character, by turns the voice of her conscience but at others completely reckless). Even then, she has a talent for making her troubles worse by talking too much and being rush.

The serial killer, Jack Delsin, is also fascinating, although we only get to know him indirectly, through his actions that at times are also very puzzling. In many ways, Jack and Shawnee are mirror images and parallel characters. Jack has his reasons (I won’t share any major spoilers but when you read the book you’ll see what I mean) for what he does, he is an ‘artist ‘and takes pride in his work (and this is reflected in the comments by some of the policemen and the FBI agent), he also has a hidden life, and loves dogs (Shawnee has her cats). He also enjoys the game of cat and mouse and the challenge(or cat and dog) and is very skilled at tracking people and reading and understanding them. The connection between the two becomes clearer towards the end and it goes some way to explaining Shawnee’s attitude and her comments at the end of the novel (sorry, I can’t say more).

I enjoyed the story, the match of the main characters’ wits ensures plenty of surprises, twists and turns, and there isn’t a moment’s boredom as the pace is relentless. I’d recommend it to readers who enjoy thrillers with a fair share of explicit detail and violence, characters who’ll keep them on their toes, and an element of romance. You’ll be scared and worried, it will make you think, and it even has its comedic moments (two bad decisions don’t make a good one, and taking your friends with you is perhaps not advisable if you’re a cat burglar). I wasn’t always convinced by the character’s changes and inconsistencies, and I felt that the element of romance and the role Levaughn ends up playing undermined the strength of the main character (I liked the ending but…). The series has plenty of room to explore the main characters’ psyche and there are unresolved issues and mysteries that will make us come back for more. I have the feeling that it will go from strength to strength.