Today’s Team review is from Terry she blogs at http://terrytylerbookreviews.blogspot.co.uk/

Terry has been reading Need To Find You by Joseph Souza. 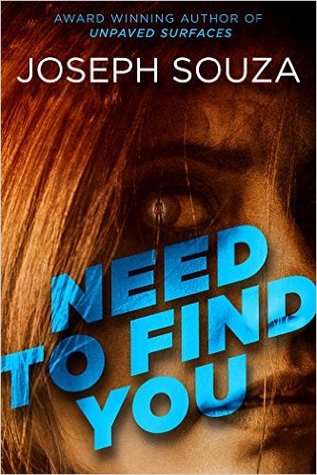 Review: Need to Find You by Joseph Souza

This was a strange one for me; I went from not being that keen to liking it, to not liking it and back to thinking it was perhaps rather terrific, all the way through.

It’s a crime thriller, starring the tough and damaged Yasmine, two cops, and a sinister underworld figure.  The cops, Whip Billings and Philip Haskins, are so well done, and I enjoyed reading their sections, even if the characters did walk straight out of Standard Fictional Detectives Ltd: wouldn’t you love to see one who isn’t a struggling ex-alcoholic/hampered by emotional demons/possessed of a need to execute his duties in a maverick fashion?  But Souza has painted them beautifully, stereotypes or not; I really liked Whip, and his father was very real, too.  Yasmine, not so convincing.

The plot is great, though at the beginning I was bothered by the stilted fashion of the narrative. Short sentences, delivering statements or pieces of information in a flat manner.  One that stuck out: ‘..he stared up at a water stain on the ceiling.  He thought it resembled a tattered catcher’s mitt.‘  Could have read more smoothly as something like: ‘he stared up at the catcher’s mitt of a water stain on the ceiling‘.  Okay, that might seem a bit nit-picking, and it seems fine on its own, but when whole pages are written like this it feels a bit wooden.  I felt the narrative could have done with another re-write, with the author looking at each sentence and considering if it could be made to read better.

Once the dialogue started the whole novel loosened up and it went from being ‘okay’ to ‘oh good, I’m enjoying this now; the dialogue is spot on, all the way through, sharp, convincing, and just right for the genre, which is so important, but then I’d come across someone being ‘sprawled in the foetal position’, which is surely a contradiction in terms, or lines like ‘he pulled up his chair in an avuncular manner’; the prose tended towards wordy without being descriptive, at times.  Then the day would be saved by lovely observations like this one, in which Whip imagines his romantic successor: ‘He imagined Dana to be one of those soft-spoken guys with a gentle disposition and a weak handshake.  A ponytailed dude who liked to hike in his Birkenstocks, carrying a hand-carved walking stick that he’d made in his workshop.  Asshole!‘. Loved that!

The story centres around the hidden journals of a famous writer, Robert Cornish, and here was something else that bothered me.  Cornish is supposed to be a writer of such acclaim that his works are studied by literature students, yet the quotes from him at the start of each chapter were banal quips.

Once I’d read the book I had a look at the reviews to see what others thought of it, as I always do, and most of them are positive.  Although I disliked some aspects, the best is very, very good, and I’d read something else by this author.  Despite the moderate star rating, I’d recommend it for those who like this sort of novel.