Today’s Team review is from Cathy, she blogs at http://betweenthelinesbookblog.com

Cathy has been reading Murder on the Tor by Frances Evesham 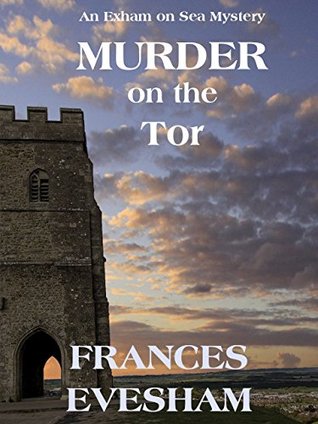 If you’ve been following the Exham on Sea Mysteries you’ll know that Libby Forest always manages, however rashly, to be in the thick of the action. This story is no exception. About to walk up Glastonbury Tor with Bear, the huge Carpathian sheepdog, who now belongs to handsome and still secretive Max Ramshore. Before Libby and Bear could begin their walk a heavy mist falls, obscuring the Tor. As Bear disappears into the mist Libby hears a howl. Reluctantly following Bear she eventually breaks through the mist into bright sunshine and sees a young girl who disappears as Libby turns to speak to her. With a frightened Bear and an Amber necklace, which Libby finds in the muddy ground, she makes her way back down the Tor. Nearing the bottom of the hill, Libby sees Detective Sergeant Joe Ramshore, Max’s son, along with several other policemen. They’d had a call about a dead man on the Tor.

Libby and Max’s suspicious are roused when they discover the body on the Tor is that of a local photographer whose exhibition Max was going to attend the next day. The death is being classed as a suicide. Joe Ramshore has his doubts and tacitly agrees to Max and Libby following their own lines of enquiry.

A well paced story with a detailed plot, written in a natural, flowing style. Libby and Max’s shaky relationship takes a backward step when Max seems more reticent than ever and Libby doesn’t understand why. The two amateur sleuths uncover more than they bargain for, and discover the murder on the Tor is a small part of a much bigger picture, as they delve into dangerous secrets from the past, involving Libby’s late husband and members of the community.

This is my favourite of the stories so far, the characters are developing and the fact the murder uncovers years of criminal activities gives it depth. The guilty parties deserve their comeuppance and I love the role Bear plays in the story. Again, I’m very familiar with, and love, the setting. I’ve walked up the Tor and it’s one of those places that does have its own unique atmosphere, which could be influenced by the weather. I can imagine how creepy it would feel to be wandering around in the mist. Love the cover image too.