Today’s Team Review is from Shelley, she blogs at http://shelleywilsonauthor.com/

Shelley has been reading Key Of Mystery by K. H. Mezek 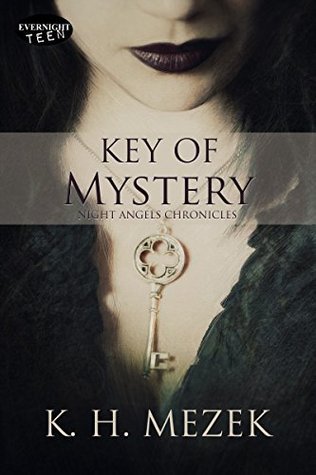 Sera and her family are thrown into turmoil following the death of her father, but after the family receive an odd black box containing a key as part of his last will and testament, strange occurrences lead Sera to investigate the ‘accident’ that took her father’s life.

Alienated by her so-called friends she has to learn to adapt to her new social standing and downgraded home life. Sera’s mother is of no help to her, nor is her brother, so it falls to her to seek help from a group of otherworldly strangers.

I found the first half of the book to be quite slow with a huge amount of information about the funeral of Sera’s father, her unstable emotions over the sudden demise of a much loved parental figure, and the introduction to the ‘Key of Mystery’. I would have liked to have been thrown into the story from the beginning but it didn’t really start to pick up pace until I was just over half way through.

As with most YA fantasy books, the main character often falls for the bad boy above all others, and it’s no different in this novel, however, I didn’t feel any real connection between Sera and Peter at all. He wasn’t the charismatic bad lad that would attract our attention, instead he was cold and two dimensional. We are told by the author that Sera is attracted to him but there was no real depth to the relationship.

I couldn’t really warm to any of the characters. At times I felt as though certain figures had been added to cover all possible teen dynamics and it became disjointed.

The idea of hidden cities, lost treasure and mysterious keys is a fabulous one and the author’s description of the denizen and dream scenes is very visual. I would have liked fewer characters with more depth to them and a much faster start. The second half of the book seemed far too rushed and the complex scenes weren’t given enough time to fully develop.