Today’s Team Review is from Babus, she blogs at http://ajoobacatsblog.wordpress.com

Babus has been reading The Playground by C.S Boyack 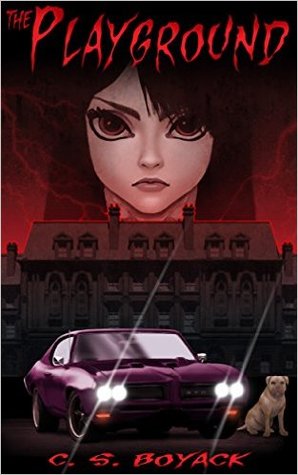 This supernatural fantasy thriller essentially describes three different vignettes: a six year old girl, Chloe, who wants the hottest toy out, a Playground Doll. A doctor who works with terminal patients and a muscle man who is for hire to criminals as an enforcer. These three different parties eventually merge into the main plot which is about a ruthless businessman, Tommy Fazio, who has created the Playground Dolls and their network, which works via WiFi for dark, dangerous and mysterious means.

However, for Tommy to achieve his ultimate goal he needs to get his hands on some software which will take the Network Dolls to the next level, but his programmer has gone missing and has taken the software with him so he hires Clovis to track him down.

Dr Grace Greybill, is happily taking care of terminal patients, when she is engaged to look after an old man, who seems fit and resides in a grand mansion. However, nothing is as it seems with her new patient and she finds herself taking on more than just the role of his physician.

I am not a huge fantasy reader and thrillers which incorporate fantasy are rather hit or miss with me, but I found this one easy to get on board with, mainly due to the fact Chloe and Clovis’ stories were easy to get on-board with. The real leap in faith came when I was reading about Dr Greybill and the grey-haired professor who passes on his vocation to her. I found this aspect of the story more challenging but ultimately, despite some vague details, easy to meld into the story as a whole.

This thriller is chilling in part and reads very much like a horror, so it kept me entertained overall, however, it felt like I was reading the prequel to a much more involved novel that is yet to come.